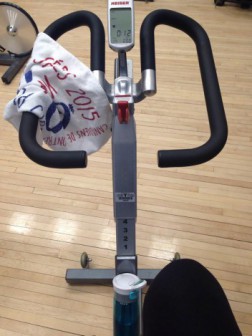 Posted on April 8, 2016March 29, 2017by adminin Girl Talk, I do things so you won't have to, The awesomeness that is the inner workings of my somewhat disturbed and unarguably juvenile mind

So here’s the thing.

Last week I tried a spin class for the very first time in my life.

I’m not going to lie. I didn’t really like it.

So obviously, I went back and  I tried it again.

While I appreciate that spin class is an awesome low impact workout that will help you to burn billions of calories and sweat your brains out in a kind of mindless way,

– which is great for people like me, who find that thinking too hard hurts the brain-

And while I did appreciate that basically there’s no coordination required, as the moves don’t get much more complicated than

Stand up. Crouch forward. Stand back up. Sit down. Stick your arm out straight in front of you like you’re super serious about giving somebody directions.

Not just pointing like you’re telling one person where to go, but sticking your whole flat hand out directly in front of you as though you were leading a brigade, or parting the

Or maybe like you’re the figurehead of a majestic ship… or something.

And while I did appreciate all of that,

I didn’t super love the part where you put enormous effort into going somewhere, but never actually arrive at any destination.

I didn’t love the part where the instructor suddenly yells at you to stand up but doesn’t tell you to slow down first, so when you jump up, because you’re still in motion, you are abruptly pulled back down, vulva-first on to your rock hard bike seat.

But you know what? I’d be willing to overlook ALL of that if it wasn’t for ONE thing. Yes, the thing.

The THING here, the thing is MUSIC.

And I get that actual qualified instructors are not DJs, sadly, but certified based on a certain level of competency in bike assembly, bike safety, heart rate monitoring, the fundamentals of coaching, the finer points of crafting unforgettable class ride profiles, and so much more… *cough*

But something has to change, and here’s why.

And more like the trailer for a girls night out ( not a movie, but the pre-game drinks you down and tracks you play while getting ready for an actual real live night out with your Gyals)…

or the soundtrack to some good old fashioned drunk angry sex.

Stay with me here.

I have the attention span of a flea.

Also I need a prize to keep my eye on.

ESPECIALLY if, while I’m doing it, I have to listen to Chicago. Or Foreigner. Or Dexy’s Midnight Runners.

Don’t get me wrong.

Come on Eileen holds a special place in my heart, and is a very lovely song to listen to,

If you’re riding your not-stationary bike down a gravel road, lined with daisy fields, with a picnic in your basket.

I love a lot of Michael Jackson’ music, but The way you make me feel

makes me feel like getting off my bike and leaving.

What a feeling, from flashdance

but doesn’t make me feel like cranking my gear up and spinning my legs around and around, while going absolutely nowhere, with my arm straight out in front of my face.

I need punk rock, hip hop, old school rap, techno rave, pop club music, I don’t care what, but something that makes me feel some serious attitude on a mission.

If I have to stand up and pound my feet into the pedals as hard and as fast as I can and not get angry and leave because no matter how hard or fast I peddle, I don’t even get two inches across the floor…

I need to do that to ACDC or Turbonegro or… honestly,

I’d be willing to tone it down with the  Iggy Azalea, or Britney Spears even. I’m really flexible that way. Just don’t get right up in my face and scream at me to

And I don’t care how much I love him, or how slow you are pedaling or even if we’re all off bike, stretching out our hamstrings and doing sun salutations. It is NEVER okay EVER to play Bon Jovi’s Dead or Alive during an exercise class of any kind.

And I just absolutely, under no circumstances ever want to be half naked, sweating with strangers, thrashing about wildly on a piece of dangerous (I’m not kidding I’m pretty sure I broke my cervix) machinery while frantically and desperately nursing on my water bottle…

to the Doobie Brothers.

I will say these two things.

#1 To the teacher who had the sense to play Joan Jett’s Bad Reputation at the end of her class.

That and that alone, is the only reason I came back for a second class. So, literally… well played.

#2 Don’t think for a minute that that I’m going to let Starship keep me from learning how to love Spin. I’m going to make that class my bitch, whether I like it or not.

In the meantime, I’ve taken it upon myself to start working on a few playlists of my own for my at-home-spin class of sorts. And I say of sorts because I don’t actually have a stationary bike at home to sit and go nowhere on so I have to practice on my couch for now. It’s a work in progress, and I’m open to suggestions (unless your suggestions include Pink Floyd, Blue Oyster Cult and/or Creedence Clearwater Revival) but here’s what I have so far…

Ain’t No Other Man – Christina Aguillera

Let The Groove Get In – Justin Timberlake

I Fink U Freeky – Die Antwoord

Should I stay or should I go – The Clash

Get Back (Red Light District) – Ludacris

Tell Me What You’re Feeling – Nocturnal

Once Around The Block – The Devil Dogs