Posted on July 12, 2016November 12, 2016by adminin I do things so you won't have to, The awesomeness that is the inner workings of my somewhat disturbed and unarguably juvenile mindTags Athletes drink, Drinking makes you cool, why do quebecers mix their weed with tobacco

Something I noticed when I moved back to Montreal  years ago, was that Quebecers are so much more open and down to earth than Vancouverites.

“And they mix tobacco with their weed too. It’s really gross”

“And also… ” you might add,  ” Down to earth? They’re not even vegetarian! They don’t hug trees! They barely recycle, they probably don’t even know what granola is, and failure to compost isn’t even punishable by death in Quebec!”

“Some of them even spank their children. On their actual bodies.”

But then I would also point out that while composting may not be obligatory in Montreal, drinking pretty much is.

OR  at least it isn’t frowned upon. It’s basically encouraged. In fact, there seems to be a government sponsored organization that exists for no other reason than to educate the people of Quebec by writing and promoting extensive literature highlighting the benefits of it (it being alcohol) even. Like this one: 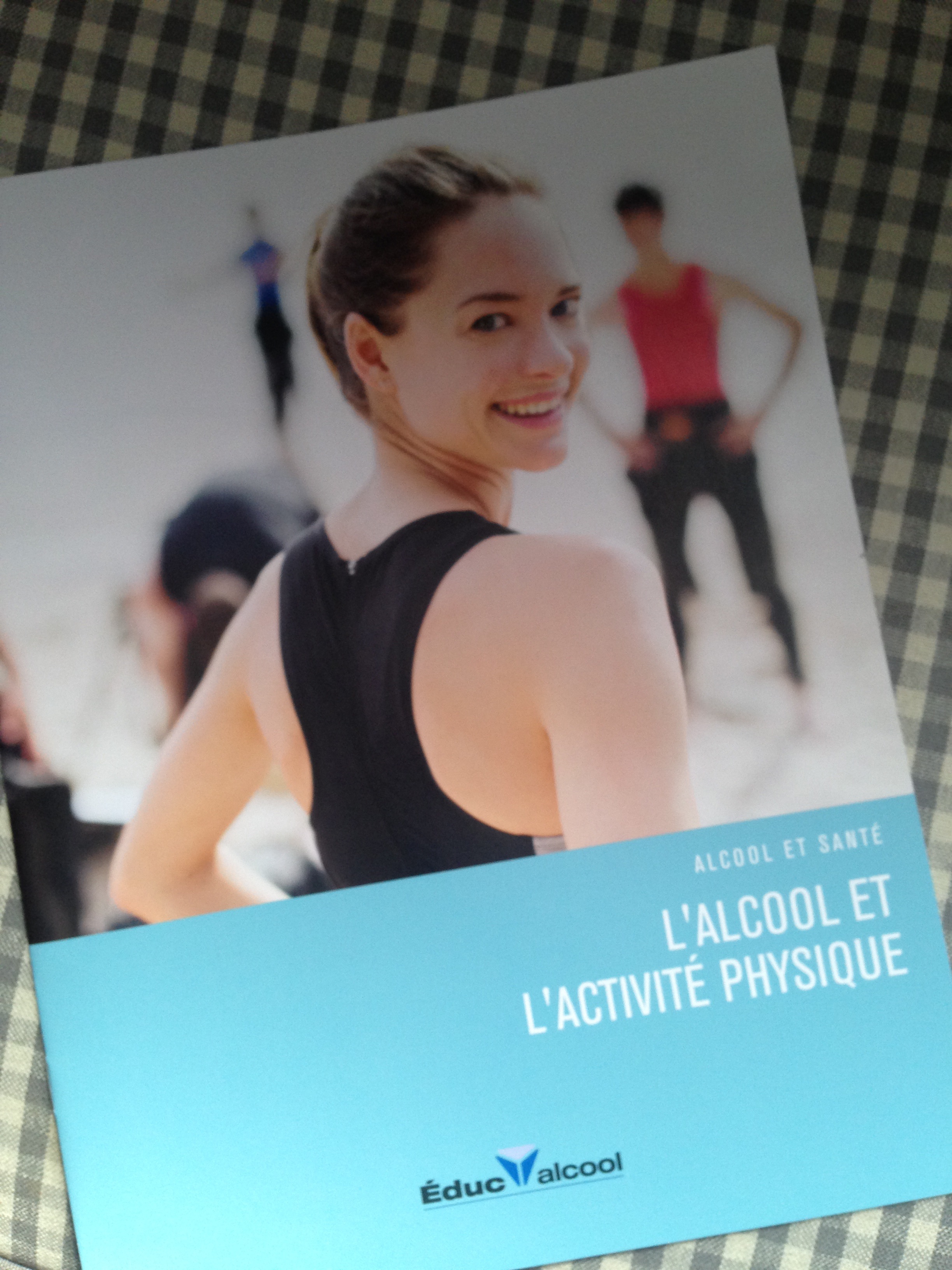 I know a lot of you live on the west coast, or even in a different country, and I was born here in Montreal, and also have lived more than half of my life here,  so I’ve taken it upon myself to give (as usual) you the gift of translating the guide for you. You’re welcome.

The table of contents includes, 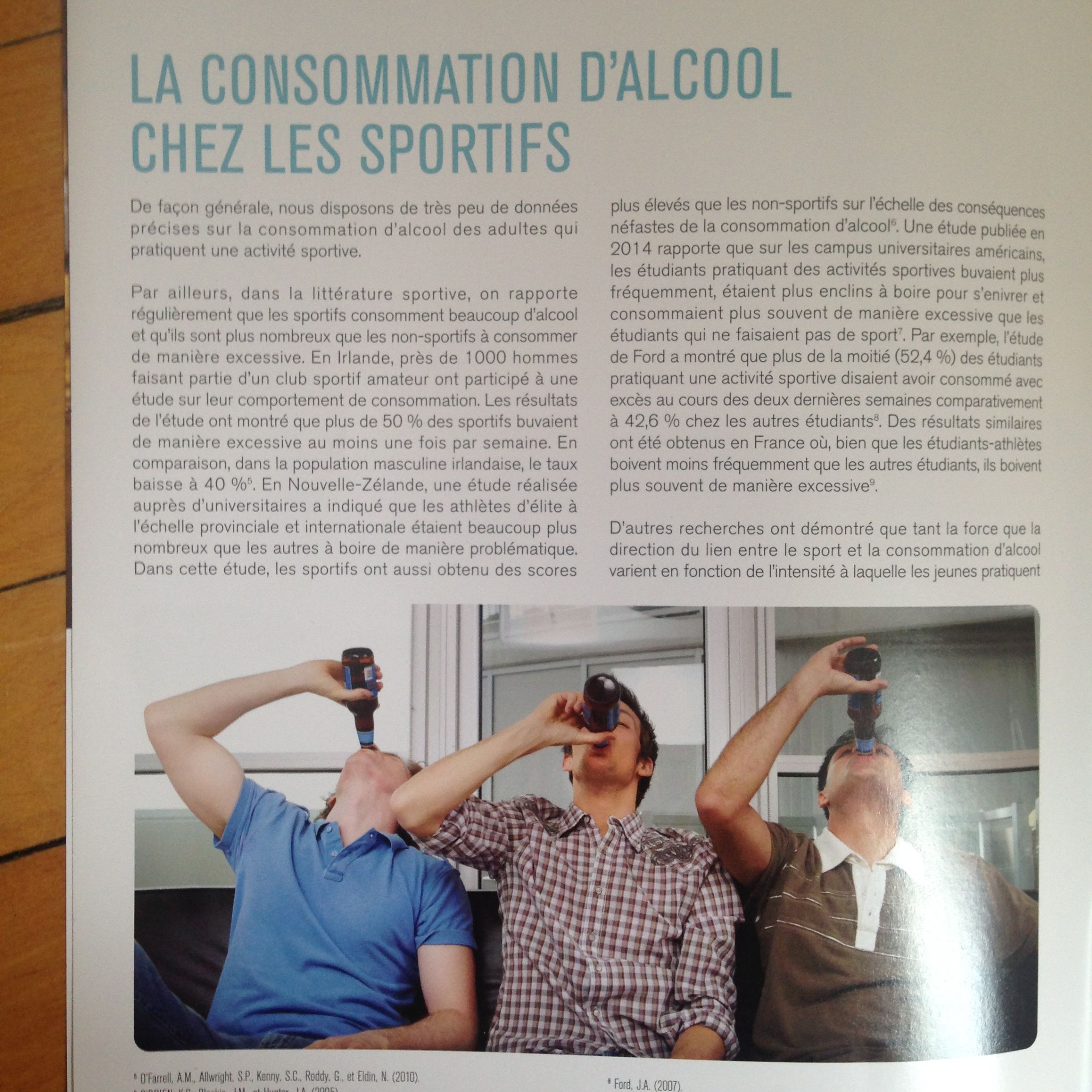 So basically what this is saying is that 50% more people who drink… are athletes…. and those who do not drink, are not.  In summary, people who don’t drink are lazy.

In 2014 some genius conducted a study proving that in North America, students who are sportive, drink more frequently than those who aren’t.

So again, I think we can all agree that people who don’t drink heavily live sedentary lives and consequently have a shorter life expectancy. So… yeah. Bottoms up people.

Here they show an example of athletes who all ingested between exactly zero to 12 shots of tequila the night before training. They’re lined up in order of how much they drank, the woman closest to the front having had the most, the man in the back having had none. You be the judge. 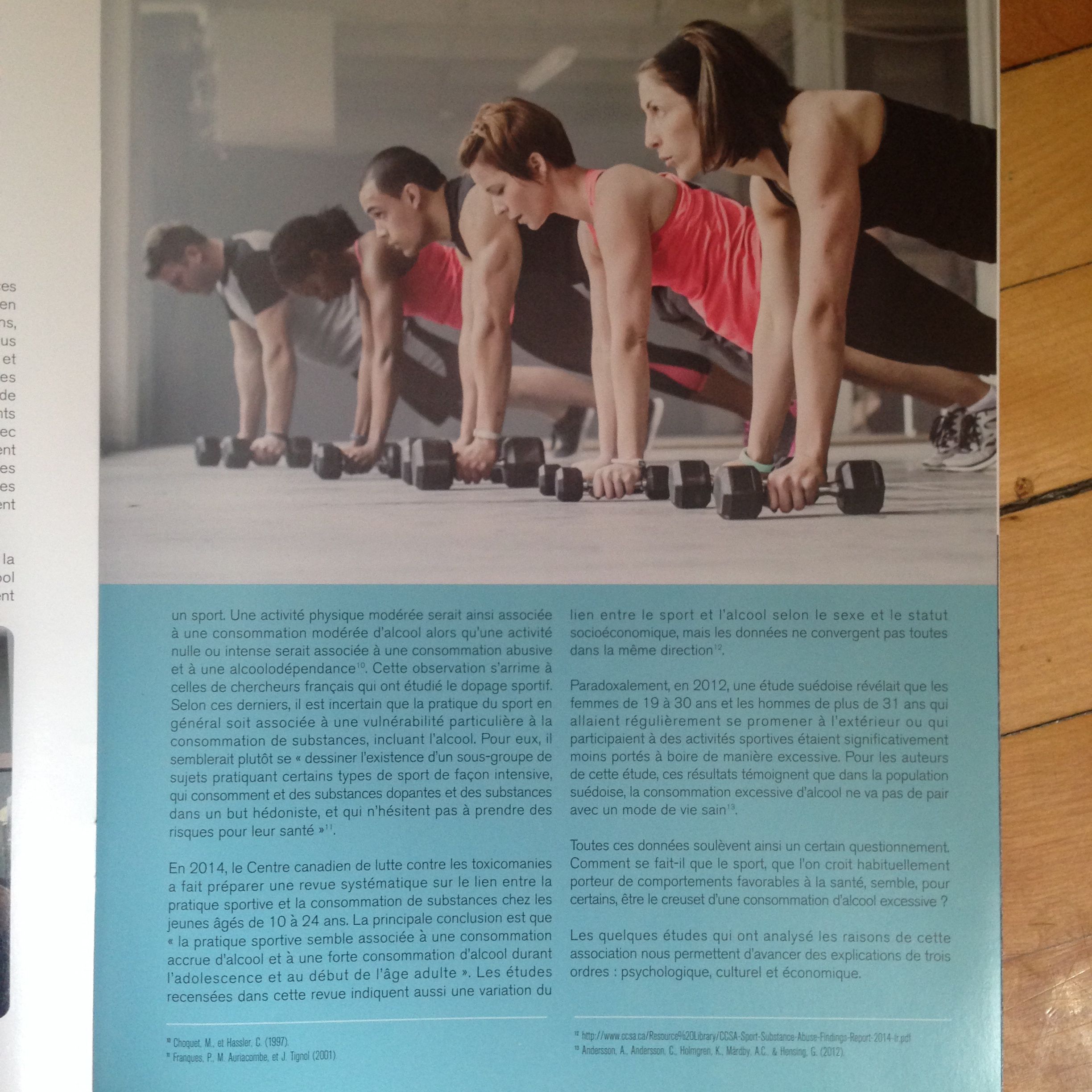 Here they bring up an interesting point about the correlation between alcohol and mental health. Which is to say that one study suggests that the reason why most athletes drink is because it helps them unwind after a day of high pressure and competitive activity.

The man in this photo is white water rafting, which suggests that he does not participate in a real competitive sport, and therefore probably doesn’t drink – which would explain why he is so depressed and lethargic, that he can barely keep his head up. In fact he looks as though he might quite literally be sleeping. He’ll probably drown. So there you have it again. Not drinking is entirely irresponsible and certainly life-threatening.

This next bit is about cultural differences so I’m not going to read it, let alone translate it because it’s written by a Quebecois, which means that it’s probably not super PC, and we don’t want to start another separatist movement, we just want to educate you people.

I will say though that a picture is worth a thousand words, as they say, and I think it’s pretty clear that this race car driver drinks.  A lot. Also he is energetic and celebratory, which leads us all to the obvious conclusion that because he drinks he is a better athlete (only in Montreal is sitting behind the wheel of a car considered and act of athleticism), and as a result, still alive. 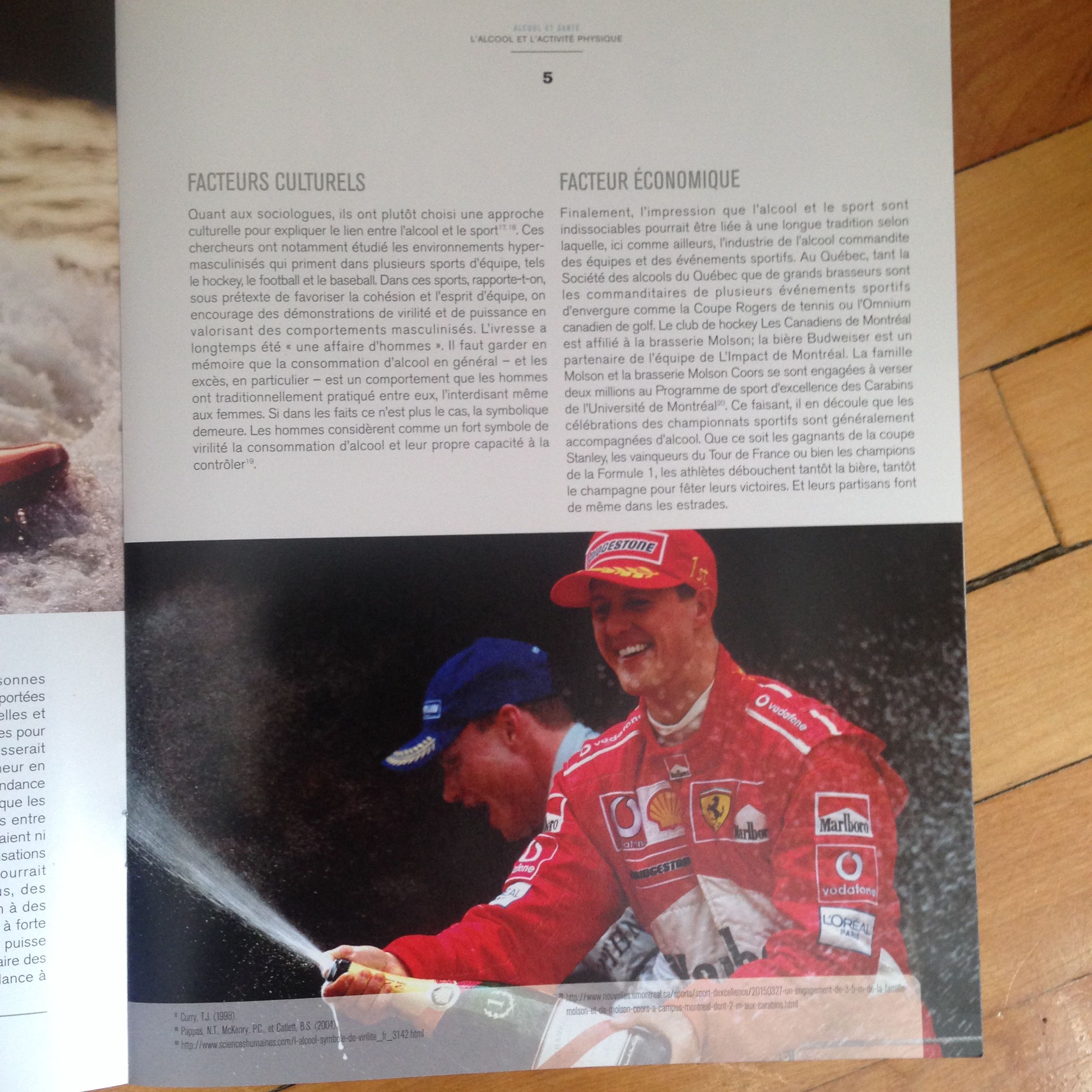 These people didn’t even wait until after their work-out. They’re clearly all drunk. I’ve never seen anyone so happy to ride a stationary bike in my life. 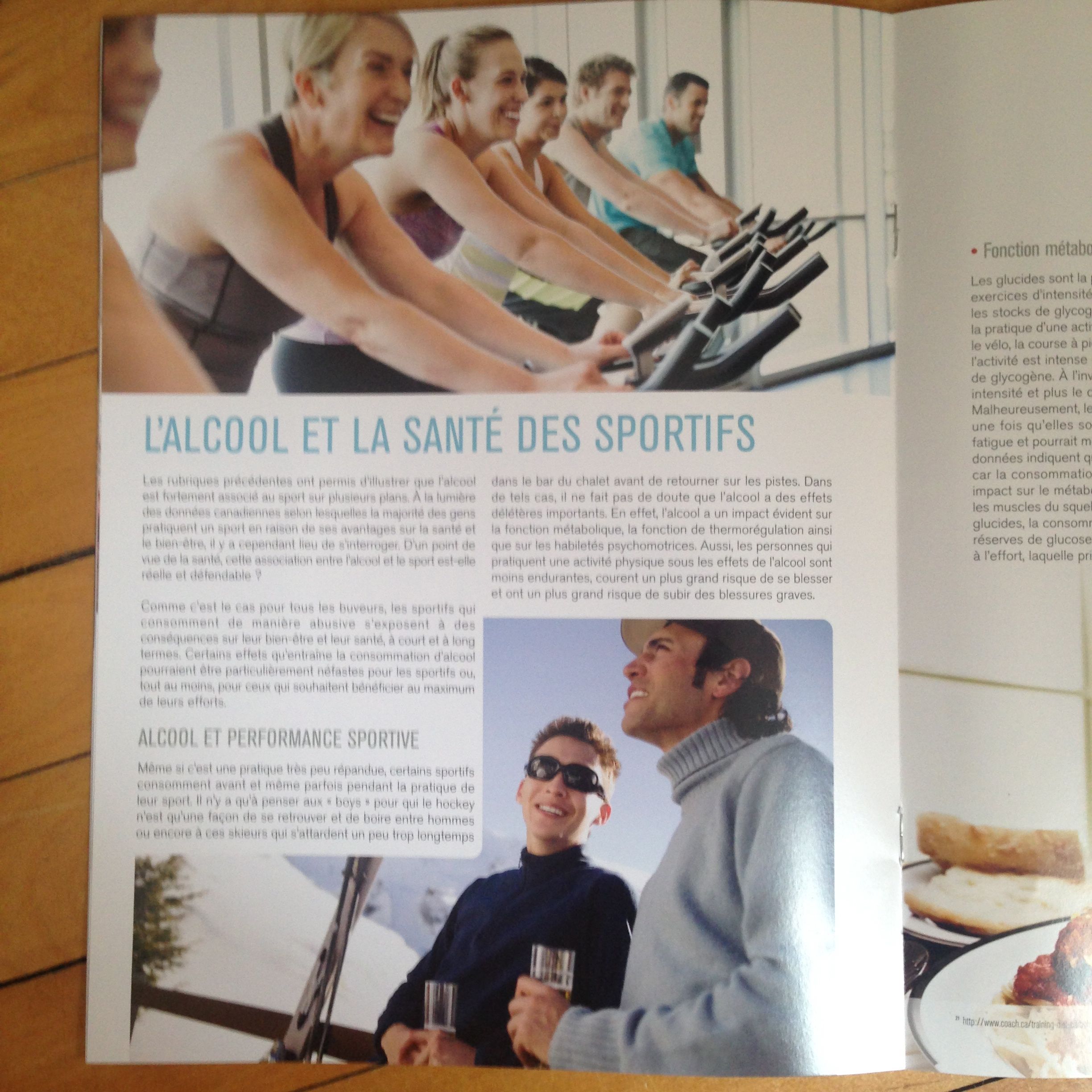 This bit above is a little blurb on how alcohol prevents impotence, particularly for gay skiing men, and if you have a problem with that, you’re obviously homophobic, impotent, in the closet and working in the pharmaceutical industry. So… Seriously. Get your shit together.

Has Vodka in her water bottle: 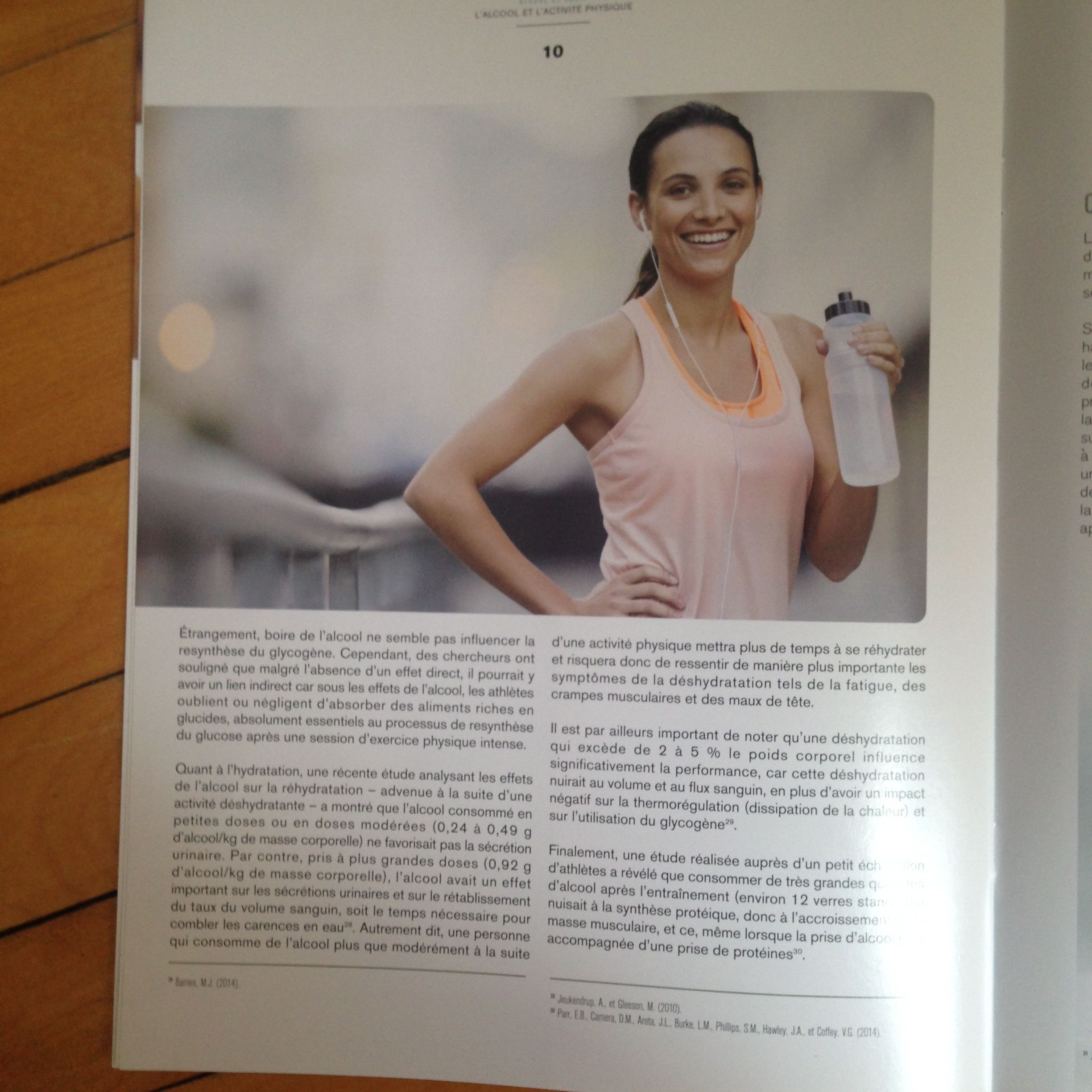 As I may not have mentioned, I did actually grow up in Vancouver BC, so my French isn’t exactly perfect, but despite being a beach-combing vegan I know enough of the language here to confidently tell you that in conclusion and summary, this article proves that despite years of research that says differently, drinking really does make you cool, and people who don’t drink are old, lazy, tired, fat, and probably going to die. 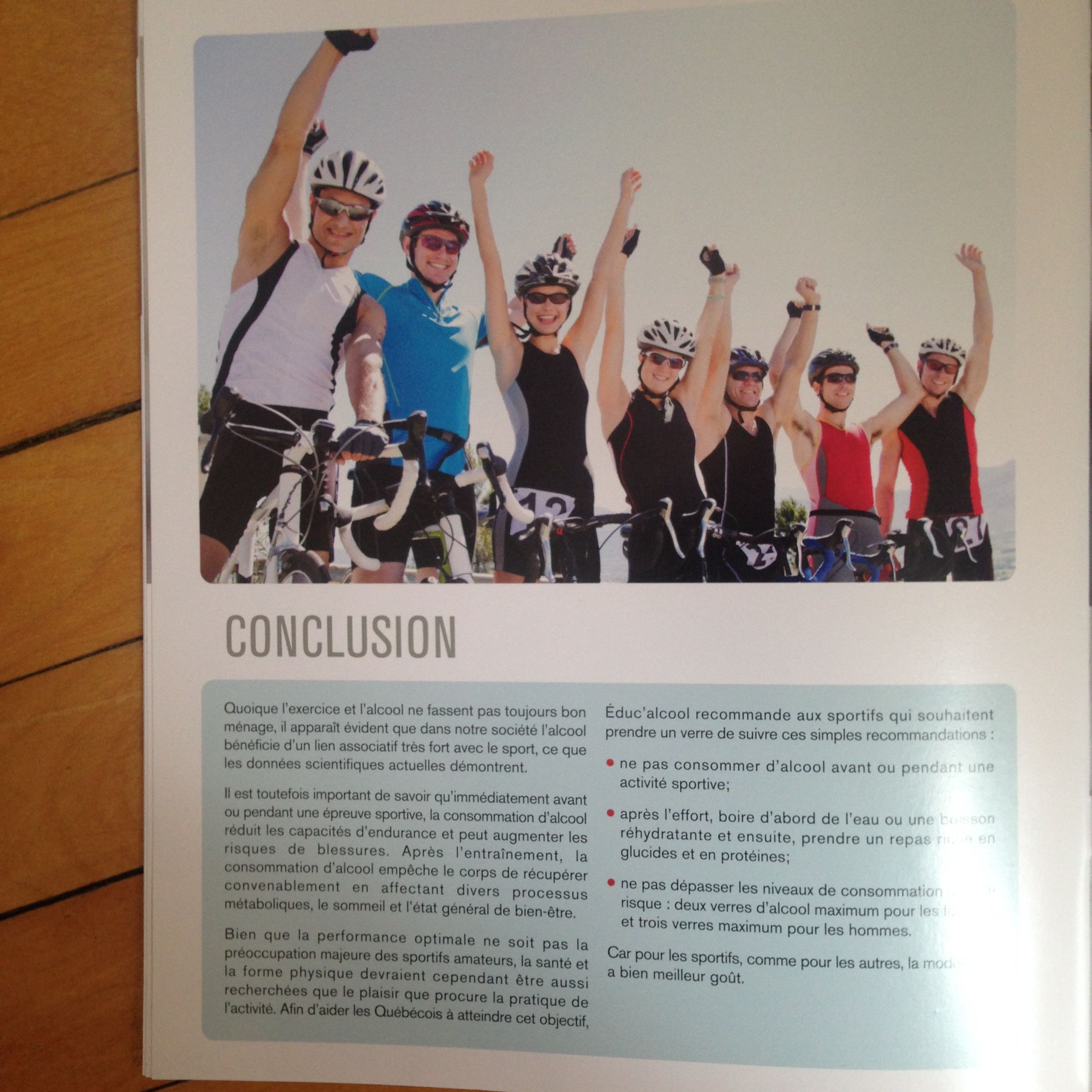