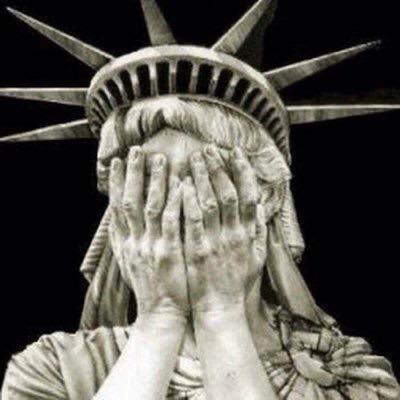 Maybe it’s our fault, because we forgot to stop to buy champagne on the way there.

Maybe deep deep deep down inside, we knew that the bottle of champagne would have just sat there on the coffee table, an unopened metaphorical bottle of salt for the infected wound that would fester deeper and deeper into the night, and the soft tissue that is the hearts and souls of the people of this country.

When I had originally planned to go home (and by home I mean my mother’s house – for the sake of this story and the heartstrings of its readers) for election day, it was with the full and selfish  intention of being physically present in the United States of America, on a day that would go down in the history books as the the day that the first ever WOMAN was elected as the chief and commanding officer of the entire nation. The elect of the first woman president of the USA. The day that Bill Clinton would be come America’s first – first man of the White House.

By around 7:30pm we were already getting reeeeeally uncomfortable.

By 8:30 we were nervous but still hopeful.

9:30 we were delirious, but negotiating hard.

“But there’s Pennsylvania right? And um… *voice cracking* did you say the results were in for Arizona already? Did.. huh? What what about Michigan? They’ll recount Florida though right because that was only by 20,000 votes so… what? Oh…”

By midnight it felt like we were on day 17 of  news coverage of a plane crash, but just couldn’t bring ourselves to turn it off, in case they found a wing… or seat, or a bag of pretzels…

By 1 o’clock my mother had gone to bed.

At 1:30am we were still negotiating

“Maybe it means… unless she… do you think they… okay but the popular vote, I mean…”

And somewhere around 2:00 in the morning, we crawled angrily into bed.

The next morning we woke up in full blown shock. We wandered the house like bumper cars on valium, muttering to ourselves, and to each other.

Wednesday evening, we saw that there were demonstrations growing in the streets of downtown New York. I wanted desperately to join them.

I felt an ache inside me, a longing to join in solidarity. I felt helpless otherwise, it’s the closest thing I could possibly do to “something”.

But I knew that my mom would throw her body in front of the front door if I’d tried to make a break for it. She’s had a lot of practice. I’ve been running away from home on a pretty regular basis, since I was 2 years old.

I don’t have words to eloquently express how hard it was to cross the border from New York to Montreal on Thursday morning’s  drive back home. I felt like a traitor, abandoning my people in amidst a nation-wide disaster. How convenient for me to have another country to run away to.

But it was tying me up in knots inside, and it felt urgent to make sense of it all before my girlfriend and I  had to declare our 4 bottles of wine, sac of combos,  and 3 bags of dog food.

“You don’t understand, it feels so wrong to leave right now”

“Really? Because I can’t get out of here fast enough. I was ready to start the car Wednesday at 1:00am.”

“Get the hell out of here.”

“Can you hand me my passport?”

“As an American, can I become the President of the United States, even if I was born in Canada?”

“Ted Cruz was from Alberta. No sir, just 4 bottles of wine. Thank you, you too!”

Maybe it was a bit hasty of me to decide right that second, that I should give up my dream to be a comedian/author/singer-song-writer, to focus my energy on building my presidency campaign.

Maybe. But I had to think of something. Somebody has to save us! Maybe there’s another possible plan. Is there? I don’t know, because it’s the only plan I could think of. Is there a better plan?

I did a lot of soul searching this week and I still haven’t come up with that plan.

I heard a host of politicians and  TV personalities talk about how  we have to work together. How we’re not listening to the other half of America, and how they voted for Trump because  they’re scared and sad and frustrated.

I would start to realize how true that is.

And then I’d see all these horrifically violent, racist and homophobic rants on social media. And I’d hear about all the violent assaults on muslims, gays, and other visible minorities.

And I’d realize that I don’t actually NEED to listen to crazy dangerous morons, much less stroke their egos and validate their feelings.

And I’d calm myself back down again. I’d explain to myself that we really do need to come together to find a way to make this world a better and more unified place for all of us.

I went to see Lisa Fischer in concert the other night, and she was so breathtakingly beautiful and amazing and sweet and kind. She talked of love and healing and unity and and and…

And I felt so inspired to pass that love and healing energy on to others, the way she had to us.

And then, on the metro ride home from that concert, I saw this: 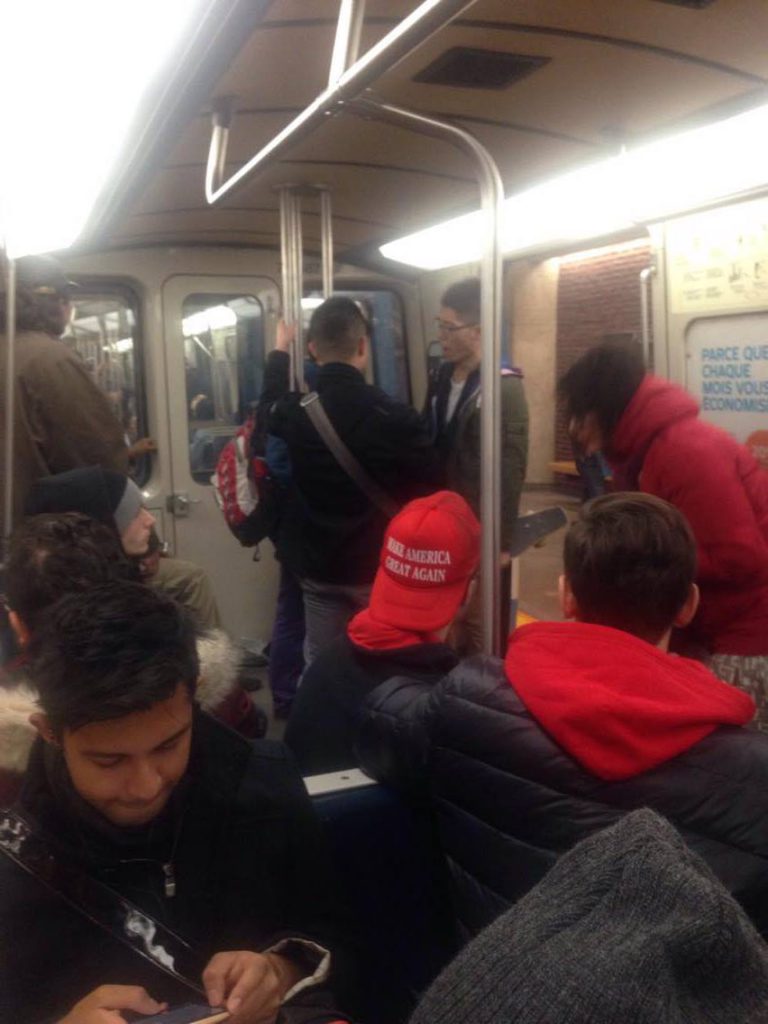 I know. I know, it’s just a hat. But that “just a hat” made me feel violently ill. I had these stabbing pains in my gut and I felt nauseas and anxious. Just like that. I wanted to get off the metro so badly. I wanted to take the hat and throw it in the garbage. I wanted to plead with the idiot wearing it “You don’t mean it, take it off please. You’re hurting people.” I want to yell at him “THIS IS CANADA!!!!!” even though I’m not even sure what that means anymore.

But I didn’t do any of those things. I just stood there feeling sad and violated. Until I stepped off the metro, when I accidentally, while passing him, turned to the guy and blurted out

“You’re not embarrassed wearing that piece of shit?”

at the exact same time as somebody else accidentally flicked it right off of his head.

I’m not going to lie. As satisfying as that moment was, I was pretty embarrassed.

I want to say that I was embarrassed for contributing to the negativity, but honestly, I was mostly just embarrassed because I said something so dumb.

I really let myself down.

I thought of at least 5 way cooler, smarter insults  on the escalator leaving the station.

Anger makes us a little bit stupid that way.

I want to end this post with a piece of brilliant insight, but I’m still in shock. And I want to tell you that I have come up with a genius plan of how to join the resistance, organize and mobilize.

2. Move back to the United States

4. Serve as military advisor to Trump, while secretly leading underground efforts to overthrow            the U.S. government

5.  Lead guerrilla troops in battles against National Right To Life, White Aryan Resistance, the White Knights of the Ku Klux Klan, Americans for Truth About Homosexuality, and National Federation for Decency.

6. Become the President of the United States of America

Probably not the most productive plan. But probably very cathartic, so I think I might still do it.

If you want to come over and smack trump around with me this weekend, give me a shout.

PS: Miranda, just in case I do decide to go the President route after all, don’t forget that you promised that if I ever go into politics you’d be my campaign manager. I have it in writing.