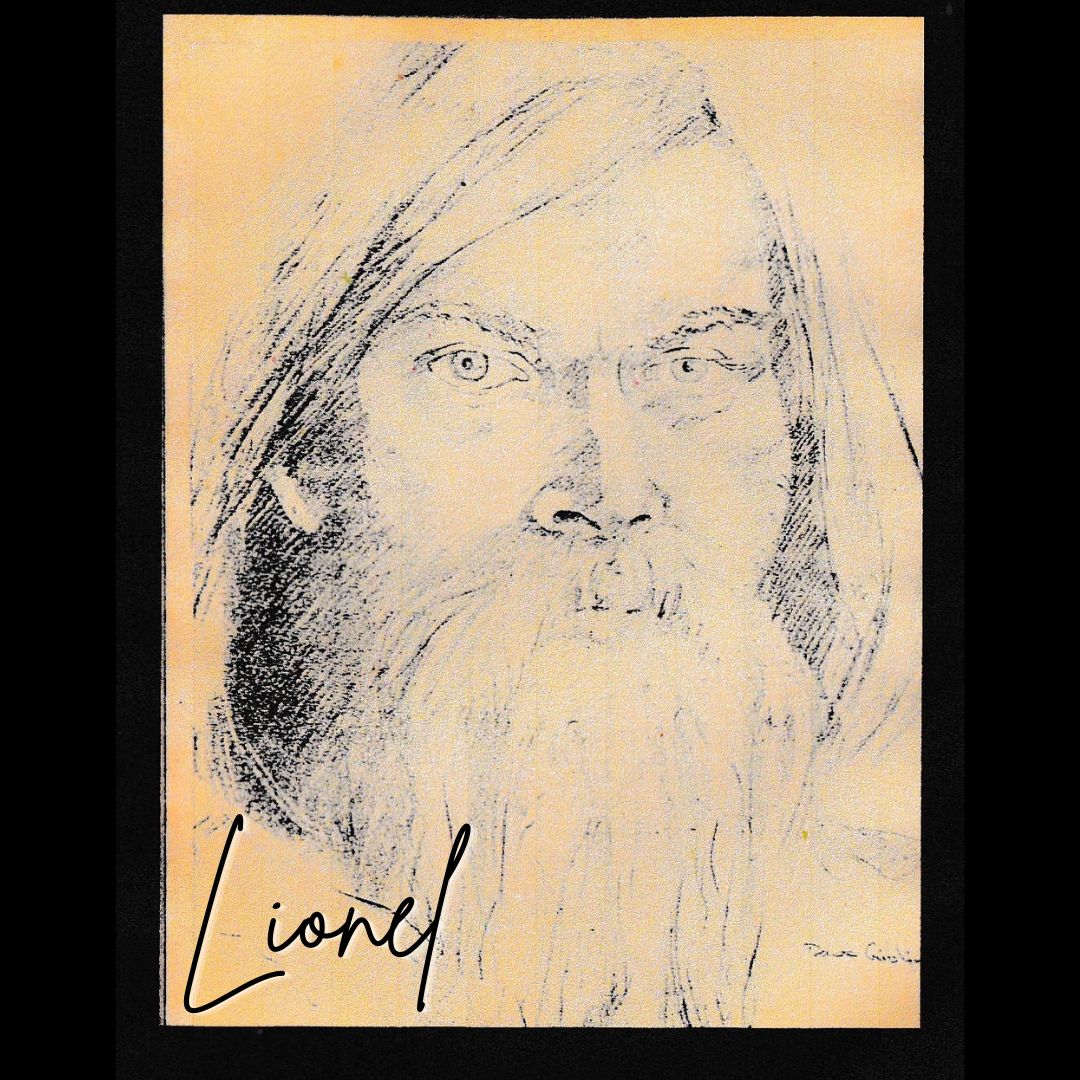 Posted on May 13, 2021February 27, 2022by adminin The awesomeness that is the inner workings of my somewhat disturbed and unarguably juvenile mind

My friend’s parents would politely greet me when I knocked on their doors to ask their children out to play, but their smiles would melt slowly from their faces upon realizing that the 30-something-year-old, 6-and-a-half-foot tall hippy, with stringy strawberry blonde hair and beard, both so long they fell somewhere near his elbows, and both decorated in the bobbles and barrettes I had adorned him with, was my chaperone.

He’d tower, even with his shoulders hunched, his bellbottoms were torn at the knees, and his T-Shirt read “Hide the scissors”.

“Hi there!” his voice thundered; his tobacco-stained fingers raised in a queen’s wave.  He’d chuckle, shaking the butterflies and bows in his beard. I suppose it goes without saying, although I’m saying it now, that none of my friends were allowed out to play on those days.

The twinkle in Lionel’s eyes was kind but mischievous and ever-playful. He was the gentlest man I’ve ever known, even to this day. He was my godfather. I called him my lion, which he thought was funny. He called me Doll, which I liked very much. He called everybody else Darlin’, gave the best hugs ever, and, despite his intimidating appearance, wouldn’t hurt a flea.

He did stab a man once, but in his defence, the man was naked and on top of his wife when he walked in on them. Even the judge agreed that it was a crime of passion.

The adulteress was an exotic dancer and a fascinating fountain of unpredictably useful information.

“You can still strip when you have your period, just cut the string off your tampon and nobody will ever know.”

Sure, I was only 8 years old at the time, and not even entirely sure what a “period” was, but it was a tip I was very grateful for, many years later, as a burlesque performer.

We left Montreal because my mother had had it with Quebec, between the malevolent spirit of the place “so much anger, bitterness, and self-righteousness”, and the unrelenting cold.

She and my father had intended on staying in Montreal only 2 years after arriving from New York, but the delay in their becoming legal immigrants, and then their divorce, and new partners and surprise children, and what-have-you, saw almost 10 years pass before my mother finally made the move.

Lionel loved Cortes Island and the simplicity of life there and thought it would do us a world of good. He said if we came, he would make sure we had a house to live in free of charge and he would watch over us, and we took him up on his offer.

We took the train across Canada. I spent many many hours sitting on a cot in our family sleeper, watching the prairies roll by the window. My favourite part of the train ride, aside from the sound of it chugging down the tracks, was the upper car with skylights where I could bully the other passengers into play cards with me when I was bored.

When we arrived in Vancouver, the first leg of our journey, Lionel met us at the train and announced that the house he had been hoping for had fallen through the day after we left Montreal.  But, not to worry he had found us a great place, one of the best houses on the island.

I don’t remember how the rest of my family got to Cortes, but I went in the moving truck with Lionel. I’m not sure we had enough actual luggage or furniture to fill it, but he was a mover by trade so that was the vehicle he had. We took a ferry from the mainland to Vancouver Island. We docked in Nanaimo and drove to a nearby diner that I still remember vividly, 42 years later, and will probably remember for the rest of my life. Dot’s Café is where I sat on a swivelling stool at the counter and ate my first and still favourite lemon pie. The meringue so high, it felt like I had to look up to see the peak of it. I ate it as slowly as I possibly could, to make the moment (and the pie) last, gazing adoringly at Lionel, while he explained the principles of anarcho-pacifism (before it was cool) and libertarian socialism. “Never get a social insurance number or a bank account Doll, it’s just the government’s way of tracking you and robbing you blind”.

This might be my favourite memory of him, followed closely by the time that he let me drink a warm can of Country Time Lemonade that I found sitting on a washing machine at a laundry mat in Campbell River.

He told us it was one of the best houses on the island, but he didn’t tell us that we’d be living in a beautiful handcrafted two-story cabin without electricity or running water, or that we would be squatting with no idea when the owner might turn up. We cooked on a wood stove and we bathed in boiled well water, in a tin tub on the kitchen floor. We pooped in an outhouse and lit the house with oil lamps at night. It was romantic and cosy, except for the horror film sized carpenter ants that flew about the house at night and whose corpses littered the floor by morning.

The cabin was surrounded by forest but overlooking the ocean.  I spent hours every day, rain or shine, building driftwood caves on the seaside, poking sticks in barnacles and collecting kelp to drag up to the front door of the cabin, where it would rot and attract flies.

I went to a two-room school for a very short while. I had to walk alone, for about a mile, through the woods to the bus stop where I was picked up and driven down a long bumpy road of nausea. My peanut butter sandwich and apple were always hot and humid by the time we arrived. Despite the novelty of having only two rooms, it was as boring as every other school I’d been to, and I found it degrading to be in the same room as grade twos, ones and even worse, kindergarteners!

One morning, instead of going to the bus stop, I obliged my sister to run away from home with me. I packed clothing, sandwiches and a carton of lime apricot nectar in one of Lionel’s sweaters, and tied it shut with the arms. We walked for at least 10 minutes before sitting at the side of the road for a lunch break.

A man yelled out the window of his pickup truck. He had a bushy beard and a sarcastic smile, but he seemed friendly enough. Maybe he could give us a ride to the ferry, in the back of his truck.

“Cool! Well, have a safe trip and watch out for the wolves!”

The dust from his wheels covered my fresh white socks.

“Are you two crazy?! What kind of parents bring their children to live on an island full of wolves?” I threw Lionel’s sweater to the kitchen floor defiantly.

“I’m never walking through those woods alone and I am NEVER going to school again!”

From that day until the last one we spent on the island, I was schooled by life experience, nature’s lessons and, mostly my new friend Ocean, who lived on a houseboat tied to a tiny little Island, not far from us. For breakfast, we ate rice pudding, and for supper, we ate fresh rabbit and deer that her father had hunted.

Ocean taught me that salmonberries have no salmon in them and are best warm and fresh off the shrub, that if you lick the bum of a honeysuckle flower it really does taste like honey, and that, speaking of bums, if you poop on a rock, in the sun, it’s easier to check it for pinworms, than if you do it in the outhouse.

She was full of information but a little short on common sense or whatever the equivalent of street smarts is on an island.

She instigated our theft of her father’s canoe to go fishing on the sea one stormy day and on another, took me digging for clams despite the approach of high tide.  Both times Lionel, my guardian angel, had to rescue us, once by boat.

I was in my late forties when I got the call from his sister to tell me that he was “gone”, as she put it. It wasn’t the first time that somebody close to me had passed away, but it was the first time I felt like it was somebody I couldn’t live without. And while a couple of years has passed since, and I am clearly living, I am not at all without him. I think about him every single day. I can still hear his laugh, I can still see his smile, and when it feels like the tide is closing in around me, I imagine him in the distance, heading toward me in his boat. My Godfather, my guardian angel, my lion.