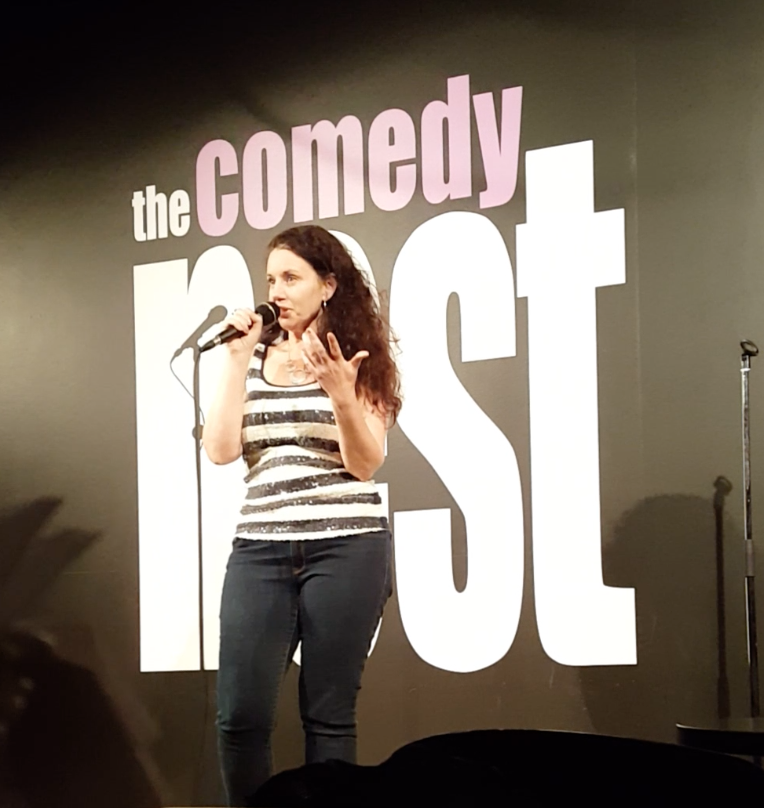 Posted on September 15, 2017October 17, 2017by adminin I do things so you won't have to, The awesomeness that is the inner workings of my somewhat disturbed and unarguably juvenile mindTags comedy nest, I'm new here, I'm sorry, Jennifer June Chapman, lady comic, My official apology, Peter J Radomski, women stand up comedy

In 2003 I was co-producing a regular Burlesque show in Montreal called Diary Of A Lost Circus, with my very dear and long lost friend Domenic Castelli. Which isn’t to say that he is literally lost. At least I hope that he isn’t, because it would be incredibly insensitive of me to mention it on the  side,  as blasé as that. But it is to say, that I haven’t seen his sweet face in a very long time and also to say that I miss him.

One frantic day, which happened to be the eve of one of our shows,  we realized that we had far too few acts scheduled. That evening, Dom did what any self-respecting but desperate producer would do, he set out into the streets to look for and recruit talented buskers/street performers.  And I did what any dirtbag producer would do and crashed other people’s shows to poach talent.

Look, I was young and new to the business. And also, I was drunk and arrogant. Which would explain why, when storming around a comedy venue like I owned the place, and demanding that the talent come perform for me the following night,  inspiring the MC of said show to confront me, inspiring me to tell to him that he should come watch my show, inspiring him to ask

“Because I’m funnier than you”.

And ooohhhh how those words would one day haunt me.

The next night, as I walked past the audience on my way back stage, I saw that very MC sitting there.

And I while I’d like to think, or at least hope, that I thanked him for coming and that  I apologized to him for being such an ass,  knowing myself, I was probably even more cocky and belligerent then than I had been the night before.

Somehow, at some point, he must have found it in his heart to forgive me as he, in the many shows we performed in together since,  has not only been a most respectful and kind and generous cast member, but he has also been a great friend.

In fact, he just happens to be one of my favourite people in the whole wide world, and his name is Peter J. Radomski.

After 14 years of life as a glamorous Burlesque queen (impersonating a naked clown, impersonating an amateur drag queen, impersonating a feminist performance art impersonator) on  stages across the world, from Toronto to Tokyo and all in between, I finally decided to grace the world with  even more of my creative genius. I realized it was high time to branch out from singing and “dancing” and acting,  to bring the joy of my impeccable humour to life,   gifting you all with my natural yet never debuted talent as a Stand-Up Comic.

But first. First I would need to take a class or two.

And these classes happened to have been held at Montreal’s Comedy Nest and instructed by Joey Alias, who did not end up teaching after-all but was replaced by none-other than the one and only Peter J. Radomski!

The first class was enlightening and inspiring and brought my true and suddenly obvious destiny to light.

And with each class after that one, I grew to progressively realize, more and more, how not funny I am.

And just to salt the wound, Peter asked me in class, on a night that I was feeling particularly vulnerable and fraudulent for being there…

So. It only took me months of classes (but not really because it was basically clear from week 2)  hundreds of dollars, and one skeleton torn mercilessly from my closet, not only to discover that writing stand-up is really hard work (not just drinking and insulting your friends in public but getting away with it because you’re famous) but also that I am not nearly as funny as I’d like to think that I am, and will never be as funny (let alone funnier) than Peter J. Radomski.

That having been said, despite the flight or fight terror it induced in me backstage, before going on, I went through with the student show case, and I absolutely loved every single second of it.

It’s 100% amateur, hard to hear, a tiny bit sad, and at the expense of everyone that I make fun of in my set, but I’m sharing it with you. You’re welcome. And I’m sorry. For lying to Peter, for making you watch this, and for not being able to promise that either of those things won’t happen again: