Posted on December 6, 2010March 24, 2018by adminin The awesomeness that is the inner workings of my somewhat disturbed and unarguably juvenile mindTags Eric Northman, True Blood, True Dat, TV addiction

The reason why I missed days and weeks of blogging is because I submitted myself to my most dangerous blog research experiment to date.

There, I said it and I honestly felt the weight lift off me with each word. I feel safe now, less alone.

“What were you thinking?”

Well,  I was thinking I might find the answer to why every time I make light of the show or (heaven forbid) dis it in any way, my friends and acquaintances turn on me, gnashing their terrible teeth and roaring their terrible roars.

“SHUT UP! True Blood is the best show ever and you don’t even know what you’re talking aboutandifyoueverwatchedityouwouldknowthatyouf$&#*YRH#@!!!!”

I figured that anything that causes grown adults to react this way over a silly HBO special was worth investigating.

The first episode was unbearable. I had to stop it 27 times to get snacks, play with the cat, pretend to pick my boyfriend’s nose etc…

I turned the second episode off 1/3 of the way through because I couldn’t take it any more.

I didn’t eat. I barely slept and when I did I dreamed of Sookie and Bill and Lafayette.

I’m not sure if it was the sleep deprivation or malnourishment but I felt sick when I watched it, literally nauseous. Yet I couldn’t turn it off.

As my addiction grew, my body adapted accordingly. I’m pretty sure my ears grew tiny protective hairs in them  to block out the sound of Bill wheezing/coughing “Suukè!” every time he talks to her.

Speaking of Sookie, can somebody tell me how a woman reaches the age of 25 without ever having heard of hepatitis?

Oh and speaking of Sookie being 25 and Bill being two billion years old and their sex being the only sex that was totally unbelievable on the whole show because there is no obvious chemistry; how hilarious is it that those two are actually married in real life?

I’m not squeamish but I find the amount of blood shed in each episode overkill.  And honestly, after having 12 blood transfusions, it’s hard for me to see drinking blood as sexy. It doesn’t freak me out but it looks about as sexy as drinking a bucket of saline solution in my world.

“Don’t watch it while I’m at school! Promise!”

She and I both concluded that the high points of the show included Lafayette, seeing  Eric Northman naked, understanding most of the Swedish and thinking for almost an entire episode that Sookie was finally dead.

Low points are too numerous to list but certainly include chronic continuity issues, Stephen Moyer, (aka Bill Compton) covering up his sexy British accent,  scads of virtual bestiality, hearing the term “fang banger” 890,987,095 times and finding out that Sookie was still alive.

Did I learn to love the show? Not even a little bit.

Did I feel like my umbilical cord was being cut when season 3 abruptly ended?

Was this feeling accompanied with a deep sense of relief?

Did I figure out why it’s so addictive?

If there is one thing I have learned from subjecting myself to this tragic episodic series it’s that I am not even remotely opposed to birthing Alexander Skarsgård’s beautiful little Swedish babies.

Oh! Plus that if you watch enough episodes back to back without leaving the house or sleeping you also feel like your eyes are bleeding. 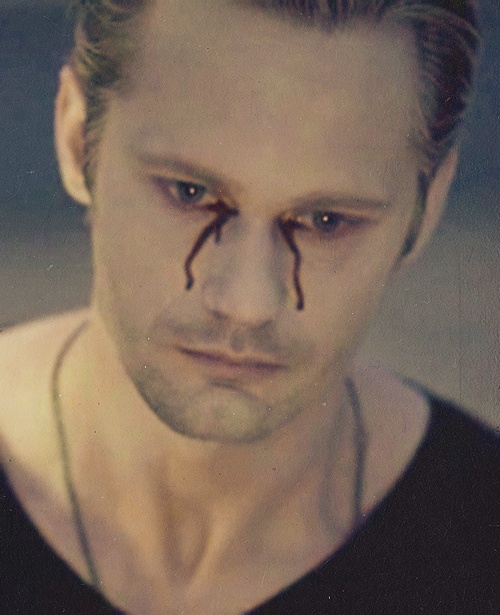