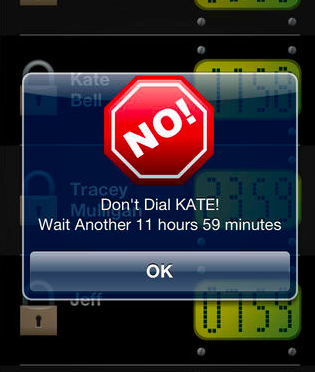 It weirds me out a little how frantic people are about their missed calls and messages. I’m not a slave to my phone and people don’t get that. I try to explain to people that my phone is for my own personal convenience, and that I don’t spend 3 trillion talk and data dollars a month out of obligation to my minions.

Cell companies advertise their features from the angle that it will give you independence but they call it a crackberry for a reason people.

I’ve had a the same crusty old hip vintage Blackberry for the last 3 years now and the only apps on it are the ones it came with in 1906.

I haven’t quite caught on to the app craze yet but I have friends and family members who are obsessed.

“It’s amazing! It tells me when my period is supposed to be!”

I don’t want to pee on your parade or anything but the Calendar was introduced by Julius Caesar in 45 B.C.E. and has been going strong ever since. I’d hesitate to credit iPod’s software designers for the tracking of the menstrual cycle.

and you need 24/7 updates on air traffic control because…..

“It’s so cool! It has like 15 different cartoon mouths that react to the sound of your voice and make it look like the mouth is saying what you’re saying.”

“Tells me what to eat”

What’s better than useless apps that create a need for something that you never in wildest dreams imagined you would one day need?

Apps that distract you from real life and force to you live vicariously through your smart phone.

What’s even better than that? Creepy stalker apps that watch you when your sleeping.

My friend Jen has this new app that analyzes her sleep patterns and wakes her when she is in the lightest sleep phase so that she wakes feeling rested and relaxed.
It also records all and any sounds she makes so she can listen to it the next day and see if she snores farts told herself any secrets in the night.

As an added bonus she has recordings of herself getting up and peeing in the night which OBVIOUSLY we all wish we had.

Any of you smartphonies in love with a useless app?