Posted on May 28, 2014April 21, 2016by adminin The awesomeness that is the inner workings of my somewhat disturbed and unarguably juvenile mindTags I love goats, I love my cat, Somebody please publish me, Who's That Girl?, Why am I alive?, why can't I be a goat?

This week I have been inhabiting the body, mind and soul of pretty much any leading lady in the first half of any Hollywood romantic comedy.

You know the one.

She’s disorganized, working an unfulfilling and underpaid dead-end job, while pining away for fame or her dream position at some bigger and better and much more glamorous company, but she’s not quite qualified or doesn’t have the connections, or the hair to get that one.

Maybe her boss hates her and her landlord is threatening to evict her, and she has maxed out all her credit cards ordering take-out and buying $600 shoes.

She has a cat.

And just when she’s run out of excuses for the bill collectors, and her boss tells her to pack her things and leave, and she’s about to be thrown into the street, and the Bailiff has left the 3rd repossession notice on her front door for all the neighbours to see,

She accidentally happens upon whatever circumstances that lead her to land that dream job, and even though she’s a fraud, and her new boss almost finds out 6 times, she manages to redeem herself by saving the whole company while falling in love with the president of the board who she hated for the first two thirds of the film but in the end he wins her over and buys her the beautiful scarf/hat/gloves that she was trying to buy but couldn’t afford in the opening scene of the movie.

And they live happily ever after – Then End.

Except that I don’t have credit cards, or a pair of shoes that is worth more than $100.00

And I have two cats.

And Hugh Grant/Matthew Mcconaughey/Ryan Gosling never buys me hats, and my dream publisher never does sign me.

So you might be wondering, how then, Jennifer June, are you THAT GIRL?

I am that girl because I am working that dead-end job, and juggling bill collectors, and negotiating with angry landlords, and so much more.

I’m the girl who, on Sunday night, had somewhere important to be and left the house on-time, and walked half a sunny block before the sky turned black and thunderous and rain came crashing from the angry sky.

The girl who ran back home for an umbrella and consequently missed the bus.

The girl who, while waiting for the next bus, took her last $20 out of the ATM and then stood in the bank for 25 minutes before the next bus came.

The girl who didn’t notice until she was already at the metro station, that the same 25 minutes she spent standing there like a twit, her last $20 was sitting there too. Because she forgot to take it out of the stupid machine.

And I’m the girl who sat on the bus visibly weeping in front of all the other passengers for the duration of the ride – not so much over the loss of $20, as in anticipation of what seems quite clearly to be some form of early onset dementia.

I’m the girl who ran (still in tears) to the metro, and jumped on just as the doors were closing, only to sit down and hear the announcement that there was an interruption of service and the metro was going to stay stuck for an undetermined amount of time.

I’m the girl who forgot her umbrella at her weight watchers meeting yesterday morning and didn’t realize it until she was half way home, as soaked as a drowned rat.

I’m the girl whose phone was disconnected yesterday, right in the middle of using it to pay the bill to keep it from being disconnected.

I’m the girl who ordered Swiss Chard in her farm basket without realizing that she had ordered it potted.

The girl who doesn’t have a garden to plant said potted chard in.

The girl who went to bed last night praying for the first time in a long time.

I prayed that I would would grow my brain cells back in the night while I was sleeping.

I prayed that one of the 300 jobs I applied for this week would call me in for an interview.

I prayed that my dream publisher would happen upon my blog and see enough potential to offer me a book deal and an advance.

I prayed for the happy Hollywood ending to my struggle.

When I woke up, there were no job offers or book deals waiting in my inbox.

But there was an email from my mother. A link to this video:

I cried for over half an hour after watching it, while asking myself rhetorical questions.

Why can’t I have that goat?

Why is that goat in love with that donkey?

Why can’t I be that donkey?

Is that donkey older than the goat?

What if the donkey dies before the goat does?

What if the donkey dies and the goat has to get sad all over again?

Why am I alive?

I swear to God, all the therapy in the world couldn’t help me…

Which is probably quite precisely why Hugh Grant/Matthew Mcconaughey/Ryan Gosling never buys me hats, and my dream publisher never does sign me.

Because, in the end, I’m not THAT girl, I’m THIS girl: 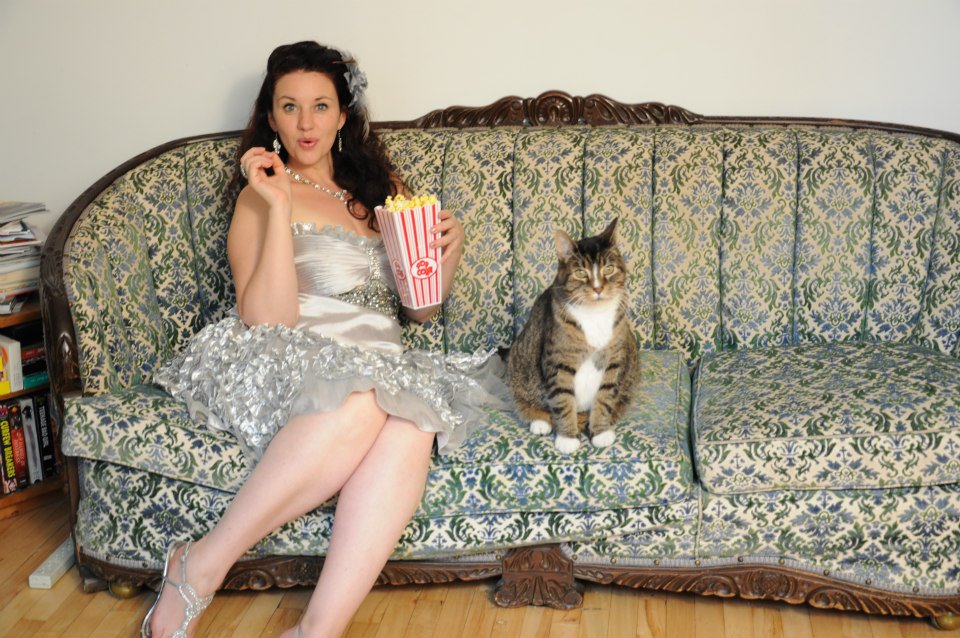