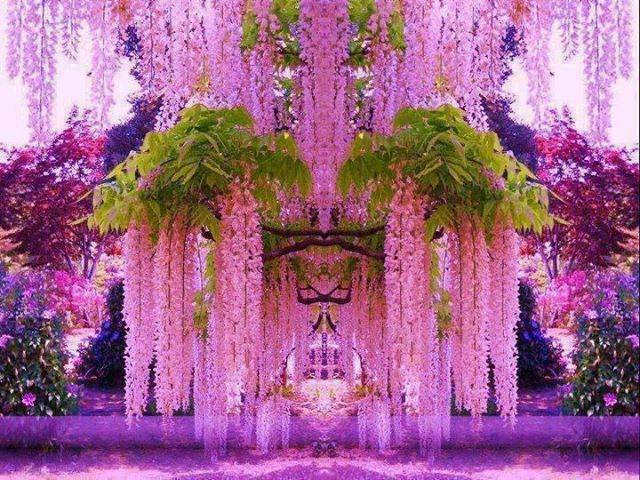 Posted on March 22, 2016March 24, 2016by adminin The awesomeness that is the inner workings of my somewhat disturbed and unarguably juvenile mindTags code lavender, diverticulitis sucks, fish is not vegan, I hate beige

So I booked another rejuvenating stay at the Jewish General Hospital quite recently, and I have to say; The new wing is pretty luxurious.

Yes it took me over 12 hours to be admitted –

and Yes there may or may not have been some confusion about whether or not said results should be trusted “I’m not saying they’re inccorrect Mz. Chapman, I’m just saying that it was a resident who read them and it might be best if we wait until a real doctor sees them before jumping to a diagnosis…”

But the room was single occupancy, spotless, huge, and equipped with a private bathroom and shower, and the view was phenominal. I spent hours after dark, watching the planes taking-off and landing over a horizon of city lights. It’s the first time I’ve even been in a hospital room that felt healing.

Sure, the nurses occasionally forgot I existed and left the IV bag to run dry, consequently causing the blood to start being sucked our of my body and up into the tubing…

Sure the dietician came to go over the menu with me, asked if fish was vegan, promised me tofu spread and kale salad, and still only fed me kosher broth (pretty good, even though it tasted suspiciously like fish) and jello for breakfast, lunch, and dinner, every day while I was there.

But that’s not why I’m writing. I’m writing because I heard something over the intercom the day I arrived in the emergency room, that I’d never heard before. Something that both confused and perplexed me.

Honestly, my first assumtion was that it was something geriatric related. I’m not sure why, but I felt  it sounded like an old person code. A senior has fallen and can’t get up code maybe…

Only they called them like every half hour, and the only senior I saw there was sitting quite upright next to me, talking rather enthusiastically to me about his kidney stones. 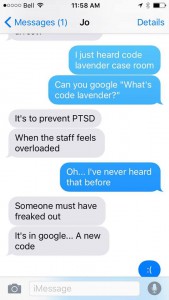 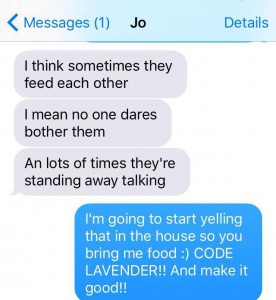 The preposé pushed my wheelchair down the hallway, passing the 13 other rooms before mine.

“Is this the geriatric ward?”

“Are these patients young enough for surgery?”

Room after room of white hair, walkers, and oxygen tanks

“I don’t know, they just told me to bring you here”

I was hooked up to 3 bags on an IV pole but told to stay active.

I did attempt an excursion to the Second Cup in the lobby, but my IV pump, not much unlike a house arrest anklet, decided I’d strayed far enough and began screaming relentlessly at me.

I banged on the silence, start and stop buttons to no avail, and so limitted all further activity to rolling and rattling (I’ve started introducing my IV pole to people as the ghost of Jacob Marley) up and down the same two halls of the 8th floor, over and over again.

By the 3rd day, the pain had dulled enough to inspire me to develope my own brand of special-needs-yoga. My mobility was reduced by the wires, tubes, and apparatus they hung from, and I was rendered somewhat less than graceful.

So much so that one of the nurses, who caught a glimpse of my *cough* Dandayamana Bibhaktapada and came bursting through the door.

Apparently not a lot of yoga happens on K8. And apparently if you are well enough for warrior pose, you’re well enough to go home. Even if you insist that going home is a danger to your health.

Even if you sneak notes to the nurses station that read

“If you make me leave, she’ll make me clean the litter box”

They released me with prescriptions for 4 different medications, a permission to not clean the litter box slip, and a dietary restriction order that calls for the consumption of only soft white and beige foods.

It’s been over a week, and I probably have scurvy but I’m pleased to announce that I’ve started eating people food again, I even had avocado and tomato! Today is my first day off anitbiotics in about a month, and I can feel my appetite coming back already.

In fact, I’ve even called several code Lavenders from the sofa this morning. Every one of which has gone unanswered so far.