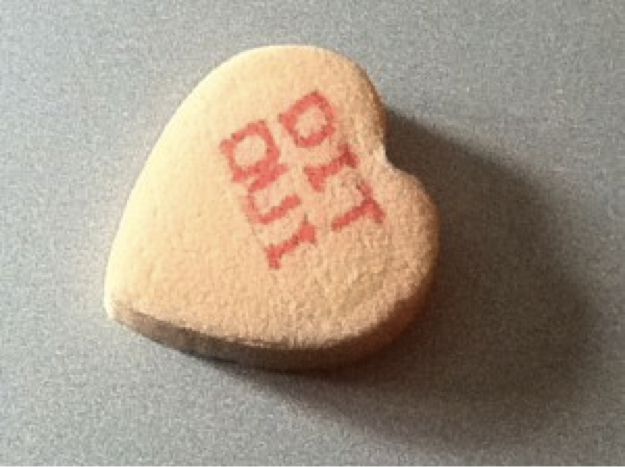 Posted on February 14, 2012February 14, 2016by adminin The awesomeness that is the inner workings of my somewhat disturbed and unarguably juvenile mindTags juicy lotus, Valentine colonoscopy

Colonoscopies are SO AWESOME!

Minus how gross the preparation is, and the super-fun side effects of the preparation and the going to the hospital part and the gowns and the painful discomfort of having your bowels inflated with air part oh, and also minus the having a tube crammed up your butt part.
But aside from that stuff, totally awesome.

As promised, I wore my valentine bra for the event and I was pretty pleased with myself about that, despite the fact that nobody actually saw it… except for my boyfriend who pretty much just laughed at me and said “You’re stoned baby” when I presented it to him.

I was lucky enough to have the opportunity to watch the procedure on a computer monitor. Colons aren’t nearly as gross as I thought they were. In fact I found it kind of cute and quite fascinating.

Of course the other thrill of the experience is laying around in the recovery room with the rest of the fart orchestra. So cool. 8-10 semi-sedated men and women, laying around farting together.
The (conductor) nurse walks around the room reassuringly,
“Don’t be shy people, let it all out!”
and they do.

“That’s it, roll onto your left side and feel the relief!”
I wasn’t disoriented and drooly like the other patients and naturally accused the nurse of not having given me the good stuff but she assured me I got the same drugs as everyone else.
Franky concurs by perception but what does he know?
“you’re slow. I mean, slower than usual.”

I broke-up with him on the spot but he redeemed himself by bringing me to Juicy Lotusfor lunch for what tasted like the best food I have eaten in a hundred years. I don’t know if it was the starvation or the quality of the food but let me tell you that I was no longer hungry when we got to the desert and this was hands down one of the BEST cheesecakes I have ever eaten and it is 100% VEGAN.

Then Franky handed me this:

Dit Oui
Which in English means “Say yes”
To which I asked
“Are you asking me to marry you?”
To which he responded.
“I’m asking your for butt-sex. You know, since…”
At which point my ass fused itself to my chair.

After vegan meatloaf and vegan meatballs and avacado salad and faux-shrimp rice-noodle salad and sweet-potato soup and brownie and the best cheesecake I’ve eaten in Montreal, we rolled ourselves home.

Where we had a nice long post Valium-drip / post pig-out nap, and later watched Belle de Jour while eating ourselves into a state of utter delirium – which, by the way, isn’t hard to do when supper is Indian take-out from Dad’s Bagels.

All in all my Valentines’ day was composed of sexy lingerie worn during a deeply intimate butt-probing, some pretty good drugs, mountains of delicious food and getting cozy with my man while watching a movie about a frigid housewife who cures her fantasies about bondage and humiliation by getting a day job as a whore.

Honestly,
what more could a girl ask for?