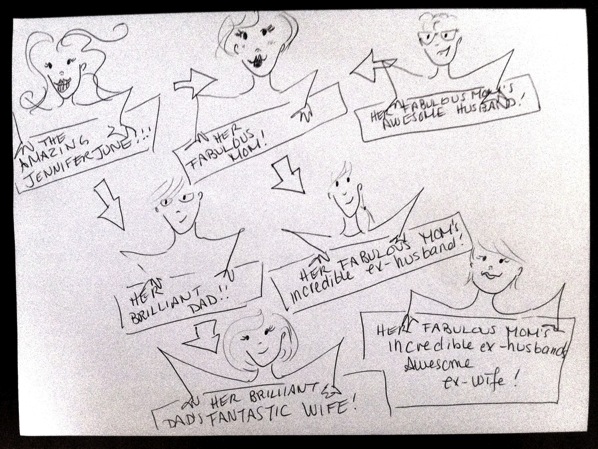 Posted on December 20, 2012July 13, 2016by adminin The awesomeness that is the inner workings of my somewhat disturbed and unarguably juvenile mindTags An armed country isn’t a polite country is a terrified country, an armed society is a polite society., Proud of my dad, Proud of my mom, “THIS IS JENNIFER CHAPMAN AND SHE WEARS SECOND-HAND CLOTHES!”

The thing is, that all kids have moments of being embarrassed and/or ashamed of their parents.

I have been blessed with growing up with not one, not two or even three, but six parents and let me tell you, there is enough fuel to feed the shame of an army of Jens in that pile, not to mention enough material to write at least five self-help books and three one-women-plays based on the movie Mommy Dearest.

But, the other cool thing, is that if you’re anywhere near as amazing as I am, chances are that your parents are probably pretty awesome too.

I know, but six probably pretty awesome parents is exactly how many it takes to make one Jennifer June as totally AMAZING as I am. So there you have it.

And that’s just the parent tree. Imagine how much paper I would need to include all the  siblings!

So yes, my mother married and divorced almost as many times as Elizabeth Taylor – but that’s what women as talented and glamorous as my mother do.

And sure, maybe my mom dragged me reluctantly into Salvation Army downtown Victoria, when I was 13 years old, screaming (in response to my indignation)

“THIS IS JENNIFER CHAPMAN AND SHE WEARS SECOND-HAND CLOTHES!”

And maybe she should at least offer to pay for my therapy because it gave me one of my countless complexes.

But it also gave me the inspiration and courage to scream on the bus to my 13 year old daughter, while she was talking to some cute boys from the private school,

“Sweetie! Do you still want to stop by the clinic on the way home and get that rash looked at?”

And that same mom of mine is the mom who I am so proud of for so many things. Some of them I have blogged about: [My Mom… ] and [WHAT’S NEW] and others I have yet to.

And my dad, my dad who tried to teach me how to have a snowball fight, at the tender age of 6, by accidentally (or so he says) throwing a ball of ice at my head, provoking a screaming melt-down and me demanding to be brought back to my mother’s house THIS INSTANT.

My dad, who fed me a corn dog just before taking me on a bus ride but then had the indecency to appear annoyed when I puked it up all over him.

My dad who… well it doesn’t matter really (unless you ask my therapist) but what does matter is that this week he did something awesome and I am super proud. And I think it’s awesome and so does the New York Times because they posted it as one of their top picks.

Without further ado, and from the brilliant mind of my father –

Gun advocates, in support of fewer gun regulations, Have claimed that “an armed society is a polite society.” Perhaps the two most polite societies we know of are Japan and Great Britain. Rather than being armed they both have strict gun regulation and few guns. Both have extremely low gun homicide rates.

An armed country isn’t a polite country; it is a terrified country. Saying that guns don’t kill people, people do is tantamount to saying that thalidomide doesn’t deform babies chemists do. Thalidomide was taken off the market and babies were no longer born with no hands or feet. Countries that have taken guns off the street do not have mass killings – or even many single gun killings. The homicide by fire arm rate in Japan and Britain is vanishingly small. Mass killings have stopped in Australia since strict gun regulation was enacted. People have to have the courage to give up their guns. Keeping them is an act of cowardice. It is telling that Ms. Lanza was killed with her own gun. Think of this as a metaphor for an entire society.