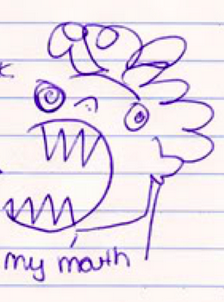 Posted on April 8, 2010February 25, 2016by adminin The awesomeness that is the inner workings of my somewhat disturbed and unarguably juvenile mindTags as lack of participation, teachers complaints, teen angel, teenagers

One of my daughters, who shall remain nameless, in the interest of protecting the “innocent” …and what have you, has been known to have the odd problem at school, here and there, because who hasn’t really, and also, she’s a teenager.

I am used to getting calls from principals and teachers, counselors and most recently a social worker, regarding my daughter’s tardiness for school, disinterest in class, lack of participation, blatant belligerence etc…

Now, I will probably both burn in hell and have my daughter taken away from me by youth protection (who are no doubt monitoring my every move, hacking in to my hotmail and tapping my phone as I type this) by continuing to write and then posting this but honestly, what’s one less mouth to feed and one more excuse to keep drinking right?

Now, I appreciate all the help I can get, I really do, but if one more professional comes to me thinking they have my kid all figured out, like they are the chosen one who has magically bonded with my horribly neglected and emotionally tortured child, I’m going to yank my kid out of the system and home school her just like she begs me to.

Because punishing myself has been one of my all time favorite ways to get a point across since I was a kid myself. I used to refuse to eat desert to prove how mean my parents were. If only somebody had called in a social worker to save me…

I totally get that they are concerned because she thinks that “homework is wack” , she doesn’t care about anything they have to say, consequence is as surreal to her as the outside world to a goldfish, that she tends to be moody and lazy and has little (if any) respect for authority but um…

This is the same child who has literally yelled at me, teary eyed and accusingly “Why aren’t I Asian? Why couldn’t you have had me with an Asian man?” because naturally, as it turns out, “Asians are the best dancers in the world”.

This is the same child who joined an after school program for street kids and victims of familial violence because “it sounded like it would be fun”.

This is the same poor neglected and clearly starving child who shoved this note at me. God only knows how she found the strength in her little fingers to write it, after the hours she spent scrubbing the toilet with her toothbrush.

Oh I’ll make her sushi alright (or force her sister to make it for me, when she’s done shaking my martini) but I will NOT be eating desert.