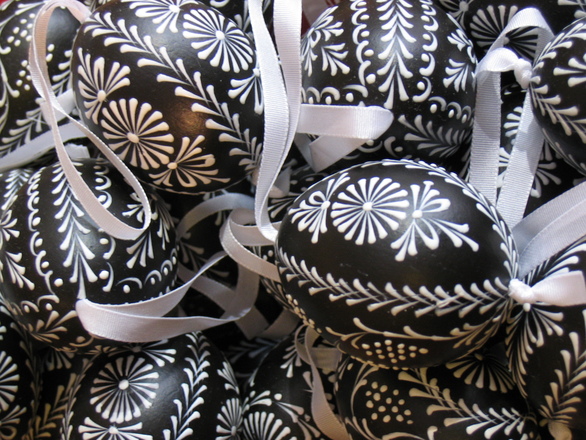 Posted on March 28, 2016October 15, 2018by adminin The awesomeness that is the inner workings of my somewhat disturbed and unarguably juvenile mindTags chocolate is holy, Easter is in you, resurect yourself, symbols of your past, WWJD, you are easter

“OH MY GOD!!! I can’t believe I didn’t send my kids anything for Easter!”

I admitted shamefully in the 50% off all easter chocolate labyrinth at Walmart this morning.

The shamefully part was due in part both to having not sent easter baskets to my kids and to actually being in Walmart.

There was no chocolate labyrinth.

The labyrinth was the chaotic maze of isles that the bags and boxes of chocolate were cascading haphazardly from.

Easter used to be such a big deal in our family, and now?

None of my kids are at home anymore, not even close to home. Like 3 thousand miles away from home.

Easter Sunday was yesterday, and I don’t even know what I did yesterday. I know that it included drinking wine on the back deck, while watching the snow in the backyard melt.

We ate dragon bowls for supper….

We watched countless episodes of House Of Cards.

I think that’s about it.

Don’t get me wrong, those are all lovely things, but my whole family used to get together for brunch and easter egg hunts and all that good stuff and now?…

did you know ( I didn’t, until today) that the tradition of the dying eggs was to colour them red, as a symbol of the blood of Christ (gross) and (even grosser) the significance of the easter egg itself is that it represents a hollow tomb?

So basically, Walmart, and probably every pharmacy in North America was selling 50% off chocolate and candy hollow tombs today.  I thought you should know.

Okay, I know this isn’t a real easter post. Or a real post of any kind but I did kind of write one somewhere else – yes that’s right, sometimes I go other places to spread the gospel of the awesomeness that is the inner workings of my somewhat disturbed and unarguably juvenile mind.

And now for an excerpt from jenniferjunechapman.com – Actually it’s not even an excerpt. It’s the whole post. I just wanted to sound cool and smart.

There is a recipe card on the bulletin board in my office, that reads – 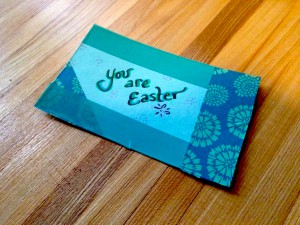 I’ve had it there for years.

Okay, to be fair, I haven’t actually had that one up for years, I’ve had many up over the years. Some got lost in moves, some fell down and got trapped behind furniture and subsequently forgotten, One even fell off and landed in the litter box that was in the crate that housed a couple of feral alley kittens for a while.

I keep writing new ones and putting them back up.

The wording may even have changed. I believe the original may have said:

Easter is in you

Either way, they all meant the same thing. They’ve all been a reminder that I am capable of resurrecting my self, my soul, my heart, my health…. whatever needs rebirth in me.

I’m not sure if my family celebrated Easter religiously, but I do remember it was always a big deal at our house. My mother was raised Catholic so I imagine there were religious elements to our traditions.

When I had kids, we continued the rituals – the hot crossed buns (adorned with the cross that Jesus was hung on and baked with the spices that his body was allegedly embalmed in), family brunch, easter egg hunts, baskets of gifts and chocolate, and – until I became vegan – colouring easter eggs.

I found out only this weekend that the symbolism of the egg at easter, is that of a hollow tomb.

The idea of the Easter bunny dropping off baskets of chocolate hollow tombs for the children to eat, is both disturbing and amusing.

But I thought about it and it occurred to me how cool it would be to think of it that metaphor personally.

What if we thought of easter not only (if at all depending on your religious stance, or possible lack there of) as the day that Christ was resurrected, but also as a day of rebirth for ourselves?

A spring New Year of sorts.

You could look at the eggs, as symbols of your past, and embrace your new resurrected self,  like a phoenix rising from the ash.

Only instead of bursting into flames, you just would eat hot crossed buns and hollow chocolate tombs.

All I’m saying is, that Easter is in all of us, and eating chocolate is holy. You can’t go wrong there.

Easter is in you. You are Easter.