Skip to content
Posted on August 31, 2012September 7, 2016by adminin The awesomeness that is the inner workings of my somewhat disturbed and unarguably juvenile mindTags fetish lifestyle, grandparents have sex, master and servant

I’m sorry, but you can’t parade around, looking like pokemon, with your scrawny, hairy boyfriend, who, by the way, bears a striking resemblance to the guy who works at my neighbourhood video store, on a leash, and expect me to keep a straight face.

Last night I performed in a burlesque show that was part of fetish week. It was all good and fun and everything but it left this on my mind:

Seriously, morbidly obese, balding-mullet dude, who looks a hell of a lot like the janitor at the community centre down the street, in latex shorts and a mesh tank top – You can’t seriously be licking your lips at me. You just can’t. No.

I have seen some really hot fetish photos/pictures in my time.

I have seen some super cool latex get-up that I would love to be able to squeeze my sausage-like self into, for fun.

Some of the outfits look really cool and the people wearing them could be in a cartoon or crazy sci-fi movie, but most of it just looks ridiculous, and ridiculously expensive on top of it. which is totally fine.

But I need to know.

How the f*** do the “fetish crowd” take themselves so f***ing seriously?

I know I sound like a judgmental bitch (which I am) but here’s the thing: I’m not saying you freaks shouldn’t wear saran-wrap and party about your foot fetish or celebrate you infantile desire to wear diapers and a ball-gag while being beaten and pissed on.

Seriously, It’s kind of like tragedy, in that if you can’t see the humour is wanting to be pooped on while you jerk off, it’s just sad and gross.

And I know you’ve put a tremendous amount of effort into your image but you’ll forgive me if it doesn’t shock me. I used to be a pre-school teacher so I’m not really new to people who wear Halloween make-up and plastic bags, who pull their genitals out in public and staple themselves to their best friends.

Yeah, I see you’re into sex. You’re all so sexually sexual about your sexuality, all bound and tied up and stuff. That’s so wild and crazy, because like nobody else has sex. Except for everybody on the planet, including dogs, chickens and garden slugs.

Your grandparents have sex! Hell, they probably have some kinky tricks of their own, I mean, they’ve been doing it with each other for 50 some-odd years. Surely they have to keep the spark alive somehow.

And who doesn’t like a good hard smack on the ass once in a while?

If you want to wear bondage rings and nipple clamps and clown noses, go for it! You want to install hooks and corset binding in your flesh. It’s your body. But dude PLEASE! Don’t glare, all-brooding like, biting your lip, and expect me not to laugh, or feel sorry for you.

I’m a mother and a social worker. I’m not scared of you. I’m just wishing your mother had breast-fed you as a baby. 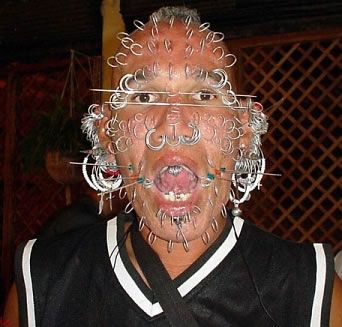