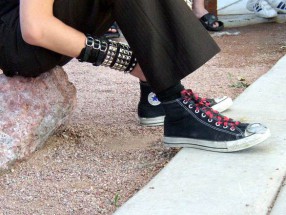 Some favourite teenage quotes of the week:

“I can do whatever I want”
“I’m moving out”
“You’re such a drama queen”
“You can’t stop me!”
“So! What are the police going to do about it?”
“REAL MATURE MOM!”
“You’re seriously expecting me to get a summer job? SERIOUSLY?”
“Why is everything always all about you?”

Via text: “Mom I don’t have enough money to get on the metro and if I have to walk I’ll die” Followed by “Mom, I’m seriously crying” Followed by “A Mexican just gave me a dollar”

“You have to give me money. That’s what parents do. It’s your job.”

And the winner (in response to being told that marijuana is a serotonin blocker):

“I don’t care. I don’t believe in science”

“Have you read the book Yes Your Teen Is Crazy?”

Somebody tell me this will be over soon. Please. Lie to me.

I know they’re allegedly wired like sociopaths or something and the part of their brain that effectively conceptualizes consequence isn’t developed until they’re 21… hundred… ish.

I know persistent acne, oily hair and pubic hair can all be very daunting but… do they actually cause brain damage? Because…

Look kid. I don’t believe in youth protection either but I’m about to give them a call in a minute.

Also you might want to find the power of faith deep down inside you and start believing in chores because I don’t believe in listening to kids who don’t have a broom a mop or a dishtowel in their hands.

And if I wasn’t exhausted, sneezing and squinting through blood shot eyes (when is allergy season?)…

And if it wasn’t hot and humid enough to make Richard Simmons cranky… Seriously I’m quite certain I could hydrate masses with my boob swamp alone and I’m pretty sure this morning there was a humidity factor of 632% or something.

And if there were anyone standing beside me, besides my stinky farting dog, to back me up once in a while…

Maybe – MAYBE –  I’d find it all hilarious enough to laugh off instead of regressing to the tender age of 16, bursting into tears, kicking them out of the house, and writing all about it in my diary.