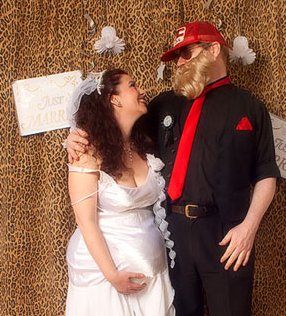 Posted on April 16, 2010April 19, 2020by adminin UncategorizedTags feeling objectified, get over yourself, I have teenage daughters, Jennifer June, Marry me, passive agressive comments, roller coaster of emotions, The Lady's Lounge, why won't my boyfriend marry me, would you marry yourself?

Pfft! Silliness, I thought, and moved on to the next letter, from a woman whose in-laws were being too controlling, and another who is allergic to her boss’s perfume.

But that marriage question kept creeping it’s way back in to my head throughout the day.

So, finally, I asked myself,

“Will you marry me?”

and I was very quick to respond

Naturally this hurt my feelings and myself had to very quickly add,

“Not because I don’t love you, it’s just that I think it would be a bad idea”

which only made matters worse.

I harassed myself all day, poking and prodding and insisting that I explain myself.

I have three teenage daughters who fight, steal my clothes, refuse to take the dog out to pee, never clean up after themselves and talk to me like I’m a crusty gravel infused bubble gum stuck to the bottom of their shoes.

I would feel inclined to defend my actual self but despite the relief I felt that somebody was finally on my side, I would also feel inclined to protect my kids. This would undoubtably lead to that awkward “you’re not their mother” conversation with myself, which would inevitably turn into an argument, followed by tears and too much sharing about our childhoods and how our parents treated us etc…

Of course, nothing would be resolved by this and myself would have to go for a long walk without the dog (because it’s not my dog) and ponder whether or not myself was really ready for this whole package deal business.

Myself would finally decide that myself was ready and loved this family god dammit!!, and that nothing was going to tear us apart. Then myself would go home to be taunted and laughed at and called “not cool” because myself doesn’t know what gapping a skateboard ramp or what the definition of the word steeze is. My ego would crumble and myself would cry..right there… in front of 3 teenagers. There’s just no recovering from that.
Second,

I rock myself to sleep. It’s a slight movement but it can be annoying sometimes.

I’m too sexy. Myself would want to have sex with me all the time and it would put undue pressure on me to perform and in turn leave me feeling objectified and used. This would force me to withdraw, leaving myself feeling rejected and undesirable, forcing myself to retaliate with self-deprecating yet passive aggressive comments that make absolutely no sense at all.

“Ha ha.. that model is so ugly.. don’t you agree? Or do you find her attractive because she isn’t short? What is your type anyway? How about that talking Kool-Aid pitcher on the Kool-Aid commercial? He’s tall…”

knowing me, I would get depressed and inflict the play by play of my roller coaster of emotions on my best friend who would (knowing her) in turn, help me stalk the hell out of myself on myspace, facebook, msn, etc…, hack into my email and … bitch about how my new girlfriend is so OBVIOUSLY a replacement of me and oh my god, she even looks like me etc…
We would find out all of my dirty little secrets, revealing what a dick myself really is, which of course would only make me look like a bad ass and in turn, attract me to myself even more.

I would lay in bed day after day, night after night, daydreaming about us getting back together. I’d write songs about myself and cry alone. I crawl back in bed and daydream some more. I would have hot sexual fantasies about myself, touch myself, orgasm and then cry some more because I can’t believe I am thinking about myself this way even after myself rejected me.

Eventually, after licking my wounds for a few years, I would tell everyone that I’d gotten over myself but the scars would be deep and my friends and family would look on silently as I bitterly drag my actual self through the next 5 relationships with people who look, act or think just like I did… repeating all our old patterns and secretly and woefully pining away for myself.