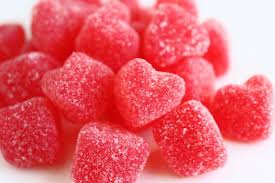 So tomorrow is Valentine’s day and it brings to mind visions of adoring glances, juicy kisses, cinnamon hearts, chocolate boxes and the Flight of the Conchords song Business Time.

I know, I know, there is a mountain of you grinchy people who think it’s stupid and where the hell does Wallgreens/Pharmasave get off telling you what day to be romantic and sweet with old what’s his/her name anyway??

Years ago I used to be all “Valentine’s Day is just another Hallmark holiday designed to seduce the consumer to blah blah blah…” A dozen roses, a box of Swedish chocolate, a candlelit dinner served with a bottle of Châteauneuf-du-Pape and a $200 dollar bra & Panty set shut me up pretty fast.

Ok, it’s a bit much, I know, but we were like 20 or something and newly in love. It didn’t set the bar or anything, I’m not that delusional.

But seriously, hear me out.

Years (and boyfriends) have gone by… kids have been born, life has become real and routine. We become more and more familiar and subsequently predictable and so does uh…other stuff. So maybe now, instead of being wooed by sunsets, food sex, weekend long sex-a-thons or my boyfriend pulling his pants down at a full taxi stand, in plain daylight, at rush hour, on the corner of St. Catherine and Amherst… we’ve come to rely on the old tell tale signs that we’re gettin’ some (or not), such as shaved legs, the good underwear, begging etc…

Some of us have key questions or phrases such as “Why don’t I throw a video on for the kids” which could really mean “meet me in the bedroom in 2 minutes…naked”.

“Could you help me with something down in the laundry room for a second?” might mean “let’s lock ourselves in the basement and run the dryer with a shoe in it while we sneak in a quickie”.

“Let’s take a nap” might be code in some houses for “how about we go in the bed where you can give me a blow job and I can pass out immediately after, leaving you sexually frustrated and full of bitterness and resentment”.

Wednesday night is the night that we make love.
Cuz everything is just right, conditions are perfect.
There’s nothing good on TV, conditions are perfect.
You lean in close and say something sexy like ” I might go to bed I’ve
got work in the morning.” I know what you’re trying to say baby.
You’re tryin to say “Ooh yeah, it’s business time, it’s business time.”

Maybe some of us have gotten comfortable enough in our relationships to slack off a little when it comes to shaving, waxing, primping, chewing with our mouths closed, bathing…
and expect our partners to jump through the roof with excitement at the mere site of our naked bodies…

Those same naked bodies that have stopped going to gym, clipping their toenails, and still have this morning’s breakfast on the pajamas that we are still wearing at 11:00pm…for the third day in a row…

Next thing you know were in the bathroom brushing our teeth.
That’s all part of it. That’s foreplay.
Then you go sort out the recycling, that’s not part of it but it’s still
very important.
Then we’re in the bedroom. You’re wearing that ugly old baggy
t-shirt from that team building exercise you did for your old work,
and it’s never looked better on you….

I’m just saying that maybe there is something to be said for a day that you are obligated to give each other cute poems or cards and candy and drop everything else you have to do or watch on T.V. to remember why you like each other, make-out like teenagers and hump like bunnies.

Don’t any of you DARE leave comments about how you’ve been married for 40 years and the sex is still as crazy wild and hot as a drunk Mexican boar and your husband still makes you a heart shaped breakfast in bed every morning dressed in nothing but a Superman cape or ANYTHINGeven remotely like it because after I finish dramatically fake throwing up I will hunt you down and make you prove it. That’s right… I don’t mind watching. I’ll do it. You’ve been warned.