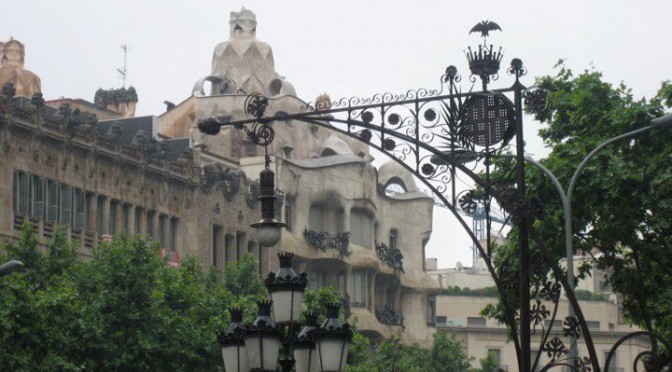 I have never been anywhere in my life.

I have never been anywhere in my life, outside of North America, far enough away to provide any sort of culture shock.

I hadn’t been anywhere outside of North America (in my entire life) up until last week.

It was six weeks into my boyfriend’s annual European tour when he flew me out to meet him in Barcelona.

I want to believe him when he insists that the ticket was a gift to celebrate my survival in the hospital this year but am more inclined to believe that this was a three birds with one stone deal.

1) You can’t break-up with your boyfriend for going on a 7 week tour if he is flying you to Barcelona to meet him at the end now can you?

2) This was his opportunity to prove to me that he is actually Spanish.

3) He would finally have the chance to infect me with his dream that we should move to Spain. I needed to see it to believe…

The flight there is really bizarre because the time difference occurs abruptly on the plane. You board, you eat supper, you read a bit, they turn off all the lights and you go to sleep for the night. Only about two hours later the flight attendants pretend the entire evening just went by, turn on the lights and serve breakfast. I don’t know if it’s only Air France who does this and if it is meant to fight off Jet lag or just to please the travelers of both time zones at once but I honestly could have done without the dinner roll with jam and orange juice, if it meant getting a couple more hours of sleep.

I tried to help the kid next to me by grabbing her tray while she got up to go the bathroom but ended up knocking it on to the floor instead. Fortunately neither she nor her mother were overly offended and they both had a good laugh watching me crawl up and down the isle looking for her yogurt cup. I never did find her muffin.

The man across the isle from me had the most fascinating comb over I have ever seen. He had seemingly no hair on the top of his head, but really long white hair in the back, which he combed from the back, across the sides and over the top. He trimmed the bottom back half inch or so of his hair, so as to fool us into thinking that the combed part was just growing naturally that way but the short parts just looked like these little tufts of cotton stuck to his neck. What was most baffling about it was that he was married, which means either that he has a wife who isn’t embarrassed to be seen with him or that he is so attached to this unforgivable coif, that he insists on keeping it despite her threats or ultimatums.

The first morning I woke up in Spain, I tossed, twitched and turned impatiently waiting for François to wake up. I was restless and eager to start my first official day of vacation but he was tired and insistent that it was only 3,  then 5 and later still only 7 in the morning before remembering that he had forgotten to change the time on his cell phone and then realizing that the day was already half over. Well, not really half over because it seems that we had gotten up, showered, dressed and out the door just in time for a city wide nap.

We walked in this desolate town of garage doors covered in graffiti, speaking of how sad it is that they have so little money that nobody’s business survived. How do they support themselves? I worried. What do they eat?

This is the dream I need to believe in? Really?

After closer inspection, one after the other, I started to notice signs indicating that the establishments were closed from 2pm-5pm. Later that afternoon, one by one, the garage doors were rolled back to reveal boutiques, chocolate shops, bakeries and restaurants all along the cobblestone streets.
We went for a walk by the boat docks and stopped for a mojito on a terassse. Right there, in broad daylight, surrounded by hundreds, if not thousands of people, two completely naked and justifiably confident men strolled past us.
“You know what babe….. I think I’m starting to believe.”