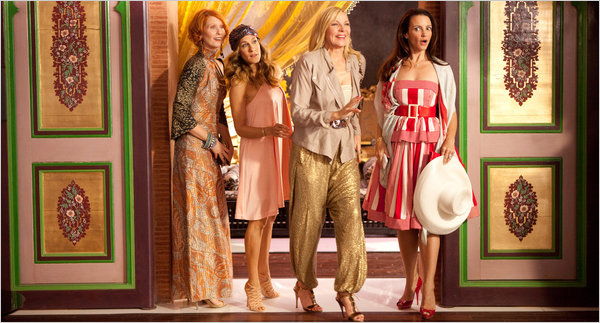 Posted on June 6, 2010October 6, 2015by adminin UncategorizedTags Almost no sex in the city, Dear Russell Brand, Get Him to the Greek, Sex in the City 2

So….
I rarely go to the movies because my kids are all old enough to like the same films as me now and it costs about 6 billion dollars for the four of us to go together. That having been said, in the last week, my girls and I have been to TWO, count ‘em TWO movies.

Sex in the City 2

was at times almost painful to watch.

Samantha has gone from being a confident independent connoisseur of promiscuity, illustrating that even older women are foxy babes, to a hormonally deranged walking hot flash, grabbing desperately for a stranger’s penis on a dinner date in hopes of getting some action. Apparently she was strong enough to fight cancer, chemo and balding but aging sends her into a state of complete idiocy, scrambling to the ground, frantically and shamelessly scavenging for the condoms that fell out of her purse.

Charlotte’s character brags of realism because it shows an honest look at parenthood yet they had to make her baby a miserable screaming monster who does nothing but cry, day and night and her other child got finger paint *GASP* on her four trillion dollar vintage dress! Can you imagine? How did her full time live-in nanny let this happen???

Miranda’s part was boring and they have turned her into a ditz which I was most disappointed by because she was always my favorite on the show.

Carrie…
Basically, her internal struggle throughout the film is that her husband has become too much like a husband and would rather stay home and eat together and snuggle in bed watching old black and white movies, then go out on the town with her and her friends? Um…

Naturally she cheats on him with her ex-boyfriend who (SURPRISE!) just happens to be in Abu Dhabi at the same time as Carrie and this in turn, provokes Big to punish her by buying her a massive black diamond ring, and they live happily ever after.

OK, I’m being harsh, I mean let’s not focus on the writing, content or continuity so much. That’s not the real reason why we go see Sex and the City right? We go for New York… oops I mean Abu Dhabi and…

The FASHION!
All they pre-movie hype about the fashion was totally misleading as well.
I’m sorry, I’m entirely aware that true fashion is neither realistic nor wearable in public and I still enjoy looking at it and imagining that maybe one day I might actually have the occasion to wear gold riding pants and a gainsborough with a brim wide enough to shade an elephant, a circle skirt made of live gardenias or a barbed wire bikini. I don’t think there was one single outfit in the entire 2 hours of the film that I would wear on fantasy island much less in the cobblestone streets of an Arab market.

So, all in all, with the exception of watching Liza Minelli “Put A Ring On It” and the brief appearance of an Australian rugby team frolicking in the pool, the film was a total fail.

Get Him to the Greek

Dear Russell Brand,
My schedule is clear and free for marriage and baby-making so… whenever you’re ready.
Love Jen xx