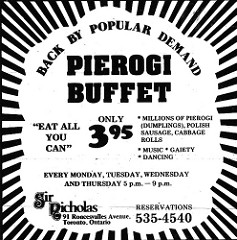 Posted on January 26, 2010February 25, 2016by adminin The awesomeness that is the inner workings of my somewhat disturbed and unarguably juvenile mindTags boyfriend thinks he's Spanish, cauliflower soup, eggs, Jennifer June, my boyfriend, The Lady's Lounge

My boyfriend, is convinced that he is Spanish.

His father’s family is Acadian from New Brunswick and his mother was born in Montreal but adopted as an infant and apparently has no information about her cultural background. François has taken it upon himself to choose an ancestral background and has acquired the hellbent insistence that he is of Spanish lineage.

And why not? The food, the music, the dance, the hot men, the gorgeous women, what’s not to like?

“François in Spanish is Pedro”
“No babe, it’s really not.”
“It is so! My real name is Pedro”
“I’m guessing it’s probably Franco”
“Why don’t you believe in me?”
“Is this a real conversation?”

I’ll ignore the fact that he doesn’t speak a word of the language, has never been to the country and drowns in a pool of his own sweat whenever he eats anything remotely spicy. I’m even willing to overlook the fact that he is clearly as white as the driven snow.

There is just one thing…

Almost all the food François eats is as white as he is, contains potatoes and/or cream and his vegetable of choice is mushrooms.
Some of his specialties include:

When I was in the hospital, he filled my entire refrigerator and freezer with assorted Tupperware containers all full to the brim with cream of Cauliflower soup, to help me heal faster. There is enough in there to feed an army.

I am forced to deduct that my boyfriend is more likely Polish or pregnant than Spanish.

Do I bring it up, risk crushing his dreams but nipping this in the bud, before the stories start about how he is probably a direct relative of Joan Miró or Salvador Dalí?

Do I pretend to believe in his fantasy and his god given right to master the vihuela?

And more importantly, what do I do with the 30 gallons of cauliflower soup in my freezer?