Posted on October 23, 2014October 13, 2015by adminin UncategorizedTags boxing and burlesque

*Disclaimer: Please don’t kill me (you know who you are) I’m just joking (mostly) it’s all in good fun.

So. I saw my first ever live Boxing match last weekend.

I’ll start by saying that, a year ago, I wouldn’t have set foot in a boxing gym, let alone purposely gone to and watched a real fight.

And if I had, I’m pretty sure I would have HATED it.

But now that I’m taking classes, and I’ve actually done a bit of sparring and witnessed the camaraderie between the women who fight against each other, I have a really different, albeit somewhat conflicted, attitude about it.

The theme of the evening was Octoberfest (Oktoberfist).

Upon walking into the gym we were immediately overwhelmed by an odour that was, a little difficult to identify at first.

“I prefer the smell at our gym” remarked Jo.

Noted. Jo prefers the pungent aroma of ball-sweat over that of bratwurst boiled in beer.

And quite frankly, I’m with her on that one.

If ever you’ve invited somebody over that you want to impress, I STRONGLY suggest that you do NOT boil up yourself a beer bathed batch of wieners immediately before their arrival.

I don’t even have the words to explain to you how disgusting that smell really is but I can tell you that you’re better off using your cat’s litter box as an air freshener.

However, we managed to embrace the Oktoberfist spirit, move past (or trudge through) the dense cloud of sausage smog and shuffle ourselves, to Esellied, and to some prime-seating.

When the fight started, I came to realize something I felt surprisingly at ease. Familiar…. even.

Only with less boobs and more blood and broken body bits.

The ringmaster.. or no wait, what are they called? The MC? Is a boxing MC an MC?

The MC was pretty much the same deal – sporting (naturally) Lederhosen and a feather adorn alpine, and bellowing into the mic.

Their intros and tag-lines are just as cheesy and ridiculous as ours.

I basically felt right at home.

And then the fighting started.

The fun part is that, instead of watching only as a mom

I also got to watch it as a boxing student

The not fun part is that it still hurts my feelings when somebody gets a bloody nose or knocked to the floor.

The funny part is – And I realize fully that this next bit is going to get my ass kicked big time – the gym that was hosting the event is in Mile End/Outremont kind of… ish.

Which is a neighbourhood of rich people, hassidic Jews, and artsy student hipsters.

Now, I’m not saying that all the fighters were rich people, hassidic Jews, and artsy hipsters.

Because none of the opposing fighters were.

But seriously, I’m not saying that all the “home” fighters were rich because they weren’t. Also, It’s hard to check the quality of one’s manicure when they’re wearing gloves.

And I’m not saying that they were all Hassidic either because they’re not. Also, there were no obvious payos that I could see, but I wasn’t wearing my glasses.

And I’m not saying that all the fighters from that particular gym are hipsters.

Or at least I’m not saying it right now.

But I did say it that night.

Actually that’s a lie. I called them Bohemian Mile-End Artisans.

And I said it really quietly. Because one of them is not actually a hipster and is actually a cop and I am scared of her.

And even more so now, after having seen her fight.

But aside from that one non-hipster cop…

“And in the Blue corner! Hailing from Mississauga Ontariohhhhh a folk singing, Diva Cup rep who enjoys basket weaving and copper enamelingggggg…. Lisa “The Bonebreaker” McCleeeeeaaaaannn!!!

who was up against…

“And in the Blue Corner! Born on the Plateau and raised in Oooooutremont! She might look like a barbie but she has short hair so that has to count for something….. Persephone “the bedwetter” Von Bismark!!!”

And in the Blueeeeeee corner!! A vegan, gluten-free, anemic ,ballet dancing yarn sculptor, who loves kale and Rumi quotes, Chaim “at least you tried” Goldstein!

And in the RED corner!!! Max “The crazy rabid fucker from Verdun who bit me in the leg back stage!” Dubois!

So basically it was like being at a Puce-Pop Craft-Fair Burlesque Show with a few drunk and roudy east-enders who thought they were at a biker bar.

And in summary, Boxing = Burlesque.

Which is why I am going to wear what I wore to perform in last Friday night’s Burlesque show, to next Friday’s boxing class. 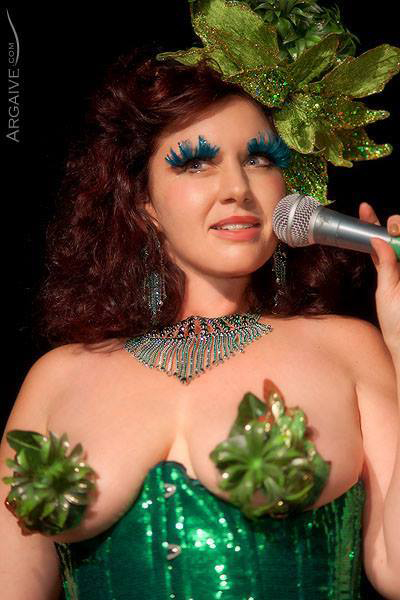