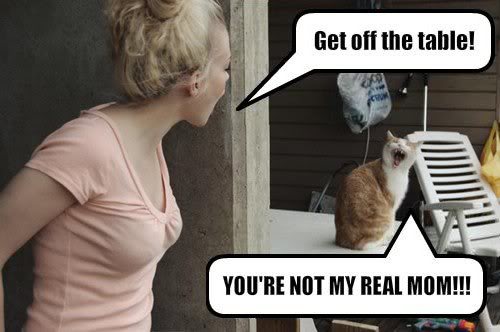 How does one ask their cat to move out?

I’ve tried reasoning with him about screaming like a banshee all night but he doesn’t listen.

He wants the bathroom tap left open so he can have fresh water at his disposal all night.

He wants our bedroom doors open all night so he can prey on us while we sleep.

That’s right, my cat is a parched arm/leg/face rapist.

Cries of horror can be heard throughout the evening, from various bedrooms, as victims are awoken by a 3,000 lb feline recklessly humping their arm.

Groans of disgust waft through the apartment when unsuspecting sleepers are awoken by a sandy cat tongue licking furiously at their faces and elbows.

A few nights ago my daughter woke up with her legs covered in cat hickies. I’m not even kidding. I would have taken photos but she didn’t want her naked thighs exposed on my blog for the entire interweb to see.

As much as I love animals, I’ve pretty much had enough of Boots/Bowtie/Duncan/Douglas/Gus/Whose-cat-is-that?

In all fairness, he’s not really ours. He moved himself in last August and we can’t figure out who his real owners are, to return him.

I was wondering why there were no “Chat Perdu” signs around the neighbourhood, but it has become apparent to me that his previous parents were probably relieved that he left. In fact, if they were smart, they would have left town while he wasn’t looking.

So now that he’s ours, how do I guiltlessly get rid of him?

It’s all fine and well to kick him out of the house at night to go prowling for innocent campers while it’s summer, but what about the winter? It lasts about 14 months here in Montréal and often reaches -200℃.

My daughter sent me that photo because it reminded her of someone.
I don’t know where it came from but if it’s yours just tell me to give it back and I will.