On December 5th, Jo found a tiny kitten on my deck.

The poor thing was scared and tried to hide from us behind a palette. We chased her around for a while before catching her, which I’m pretty sure we only accomplished because she kept banging into walls. It was clear that she couldn’t see.

She was tiny and sickly and her eyes were crusted shut.

We were so very proud of ourselves for being the saviours of the day.

Until a little later the same day, when we heard Mama-Cat at my back door, crying for her baby. And she had a second one with her.

When we went outside to approach them, they both ran.

After walking up and down the the alley, knocking on doors and questioning the neighbours, we came to learn that Mama-Cat is pretty much always pregnant but that this time there only seemed to be two kittens in the litter.

We decided that the plan was to wait to be absolutely sure exactly how many kittens there were, then attempt to trap the entire family, nursing them back to health and hopefully having the mother sterilized.

In the meantime, we made an appointment for the the kitten that we did have, at the vet.

“Sharon” was aged at about 5-6 weeks. She was sick and feverish and her eyes so badly infected that we weren’t sure if she would ever see. She was prescribed several doses of various antibiotics and drops, de-worming, and flea medication.

Every few hours we washed around her eyes and hand fed and medicated her.

At first I was worried it was going to be difficult to tame her but it only took a couple of hours for her to go from being a terrified kitten trying to hide from us, to a little purring mush-puddle in our arms.

We set up a bed, water bowl and litter box in a dog crate in my office, as Sharon’s new condo.

And every morning, afternoon, and night, we left the back door open for a little while, leaving a bowl of wet food in the door way for her mother.

After a couple of days, Mama-Cat brought baby number two back to my house, and I lured him into the office with a trail of treats.

He was easily fooled but entirely feral and literally jumping up the walls and clawing at the door to get out.

When I finally managed to trap him in a corner, I put him in the crate with his sister, who was so happy to “see” him, that she ran right over and sat on top of him.

“Jack” wasn’t nearly as easy to tame, probably because, unlike his sister, he had perfect vision.

He hissed at us, and ran and hid every time we came in the room for almost a week. I was starting to feel discouraged and worried that I’d made a big mistake by bringing him in the house, but slowly…

Jack’s love for snuggles outweighed his fear of everything. The first day he purred, I actually started to cry.

We took him to the vet also and he received a clean bill of health. We de-wormed and de-flead him.

Sharon, on the other hand wasn’t doing quite so well. She seemed to be responding to the medication, and her eyes finally started opening. She even started to see a tiny bit, mostly shadows I think, but we were getting really excited. 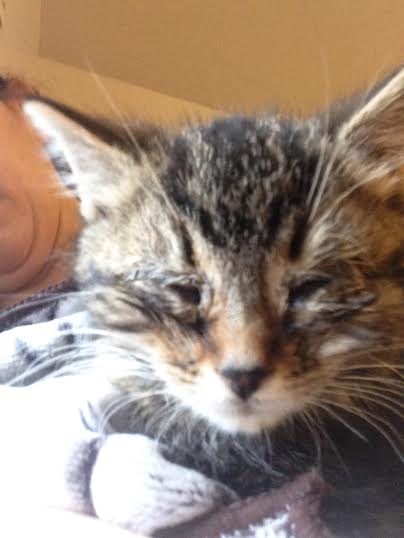 Until her body started rejecting her seeing eye. It turned out that the infection was too far gone and had created too much damaged behind the eye, for her to be able to support it, so it had to be removed.

It was so hard to see such a tiny fragile little thing go into surgery but she was amazing and pulled through like a champ.

It was touch and go with the second eye, but it’s been almost two weeks since the surgery and it looks like she’ll be able to keep it.

Unfortunately she seems to be completely blind now.

Fortunately it really doesn’t seem to bother her in the least.

Sharon has finished all her medications and has her last post-surgery vet visit this week and we’re pretty optimistic that she’s fully recovered.

For the first two weeks of this rescue mission, Mama Cat camped out on my back balcony almost full time, and she came in the office for meals and visits with her babies in the morning and the evenings. 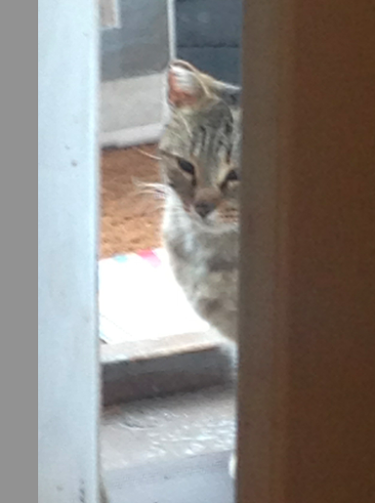 Our plan was to try and tame her enough to adopt her out but we simply didn’t have enough time before moving day. We would like to go back and get her, to at least have her sterilized but the winter has really set in now and it would be hard on her to be released into this, without proper follow-up care.

We spoke to the next door neighbour before moving and he agreed to let us move the shelter she’d been sleeping in, from our balcony to his back yard. Last we saw Mama-Cat was sleeping in it with her boyfriend (he is clearly the father of the two kittens) and an one of the older kittens from her previous litter.

We already have two cats and two dogs at home and we live in a two bedroom duplex, so there is clearly no way we can keep the kittens, which breaks my heart to pieces.

I can’t believe that after everything we went through with them, we’ll have to say goodbye to them, but whoever does take them on is going to be the luckiest cat-owner in the world.

It would be most ideal if whoever adopts them could take them together, as they are deeply attached to each other and Jack is not only Sharon’s big brother, but her seeing eye-cat.

If that’s not possible, she would do best in a family that already has a cat, who can show her around, and her new forever family will have to be sensitive to her needs. We learned quickly that petting her or picking her up with out warning startles her, and that moving the furniture is really disorienting and upsetting to her. She bumps into things constantly but learns quickly what’s where.

ALSO! The vet said that Sharon is a little miracle and actually does have some, albeit rather limitted, vision in her existing eye – and, while she is still cautious and pretty clumbsy – she is starting to learn to tilt her head in order to see a little bit better… kind of. We’re so excited for her!

All adoption inquiries can be made through Pussy Patrol Cat Rescue
(www.pussiepatrolcatrescue.com), who I have to thank a million times over for all the help and support through this, as well as Dr Veronik Auger and Dr. Jade Zollo and their team at the Clinique Vétérinaire Plateau Mont Royal who were absolutely AMAZING with all of their help and reassurance. 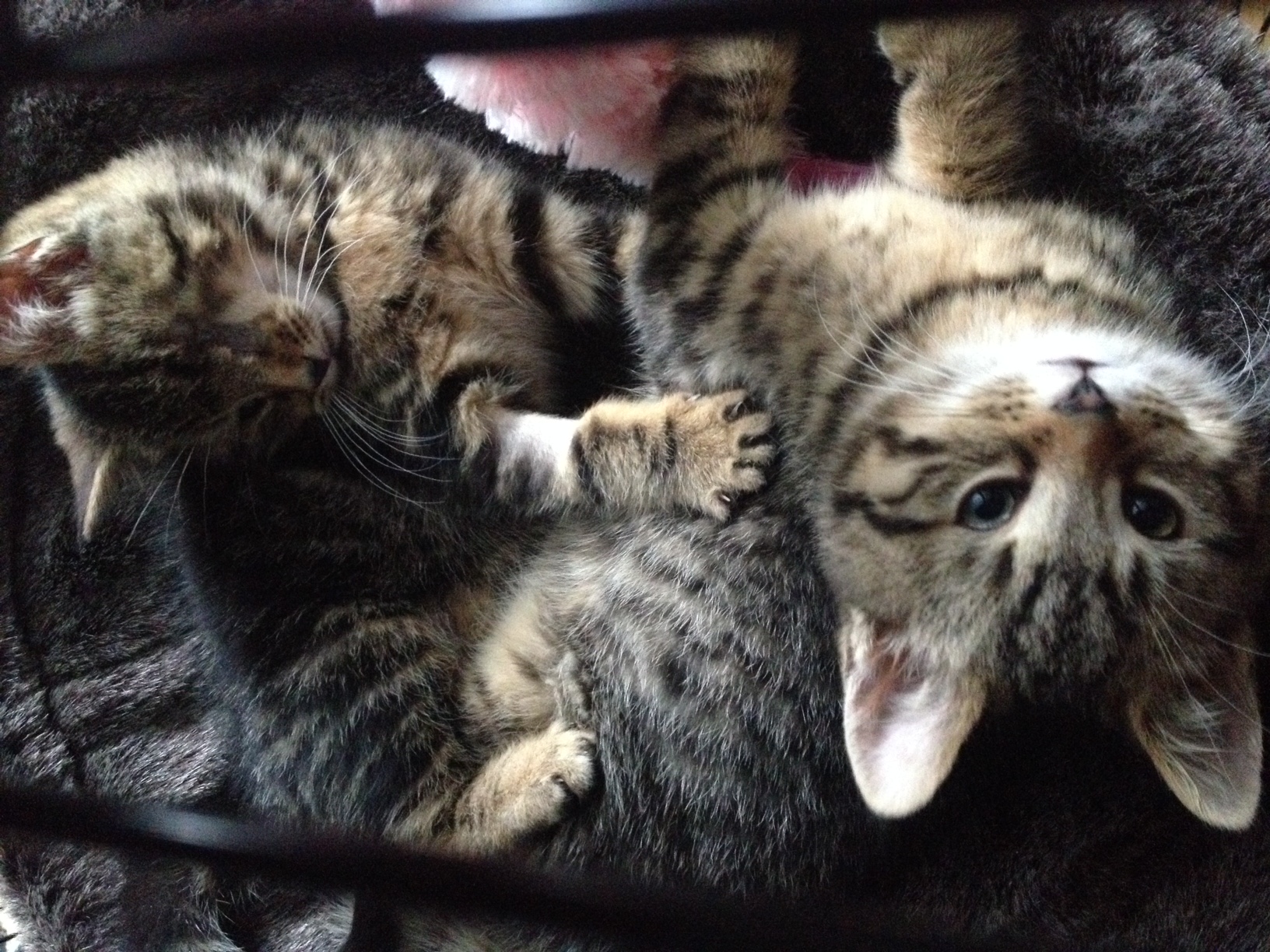 PS: Adoption isn’t the only way to help. Pussy Patrol accepts donations of any amount. Every dollar donated counts, and goes directly towards saving, rescuing, rehabilitating and socializing feral and abandoned cats and kittens.

Where your funds are going:
-Spaying/neutering
-Emergency vet care
-Medications and tests
-Deworming
-Feeding and Fostering

No profits are made from donation or adoptions and work only to recover vet costs and provide assistance to our foster families.

Sharon’s existing eye is kind of funny looking but she has full recover of her vision and is able to see!! She’s super happy, affectionate and active – She would probably thrive best in a home with another cat,  but is quite independent. 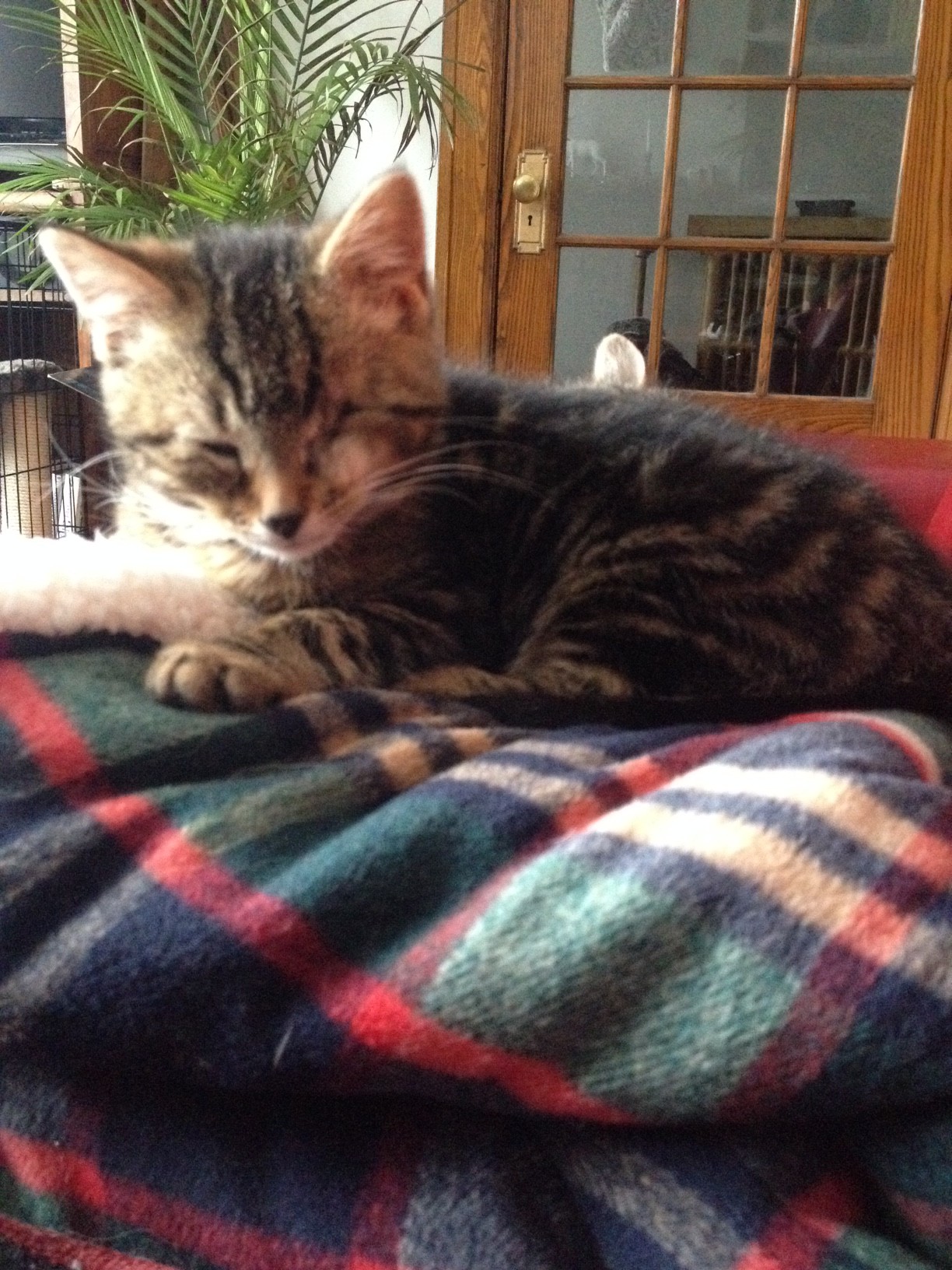 Jack is a sweetie-pie and loves snuggles but prefers the company of cats to humans. He would be best adopted with his sister as a duo.

Here he is with his surrogate mama (my cat Phoebe)